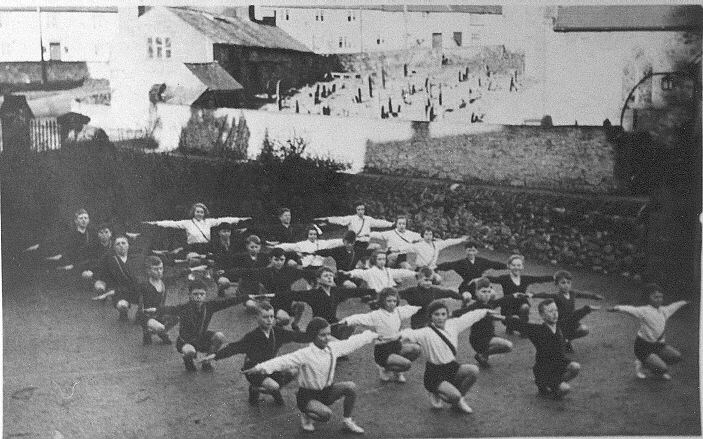 Location: On the S side of the parish church.

Built as a National School in 1857-8 by H John Fairclough, architect of St Asaph, and opened in 1859 (date on building). It was the earliest of 3 National Schools by Fairclough, the others being at Bodfari (1858) and St Asaph (1862). Llanasa school later became a church hall and subsequently the village hall.

Tudor Gothic style school of snecked rubble stone and a graded slate roof behind coped gables on moulded kneelers, and a tall stone stack behind on the L side. It comprises a main range with 2 porches (probably to provide separate entrances for boys and girls), and a short parallel wing behind to the centre. The School House is attached to the rear. The main range has a gabled bellcote at the L end, with a single bell in a pointed opening. The 4-bay front has stepped buttresses (set diagonally at the L end), and 3-light mullioned and transomed windows, except the R-hand bay which has a 3-light window in a lower porch. On the R side the porch has a boarded door under a shouldered lintel. The R gable end of the main range has a 3-light window below a blind ventilation strip.

Set back at the L gable end is a gabled porch. It has a 4-centred arch facing the front with roll and hollow mouldings, but without capitals, and a boarded door. It side wall has a 2-light window, and above the porch the gable end has a narrow ventilation strip. A flat roofed projection is behind the porch and continues around the rear where it abuts a parallel rear wing with a 3-light mullioned and transomed window in its gable end below a blind ventilation strip. The wing is attached to the adjacent School House.

The single large schoolroom was originally open to the roof, but the original trusses are now concealed above a suspended ceiling. A moveable screen divided the room into separate classes for boys and girls, with fireplaces, now blocked, at each end, but the screen has been removed. The walls have small round-backed niches with ledges. The rear wing housed a separate small classroom.

Listed for architectural interest as a high-Victorian school retaining original character, for group value with the School House, and for its contribution to the historic character of Llanasa.