Church of SS Asaph and Kentigern 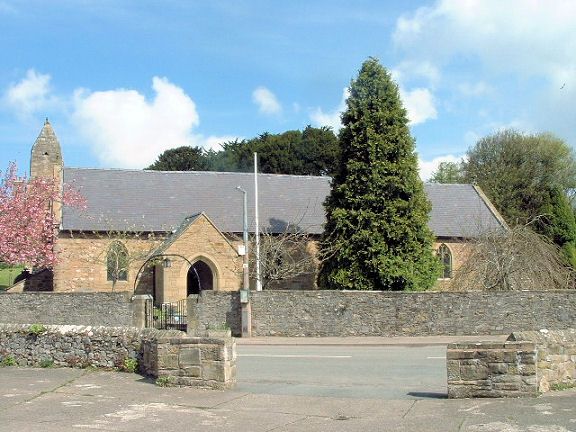 Location: In the centre of Llanasa surrounded by a walled churchyard.

The church is early medieval in origin and was probably a large parish church by the late medieval period. The fabric of the S aisle is at least of this date as a shield of c1605 is built into the wall above the grave of Sir Peter Mostyn. The character of the building, however, is principally derived from remodelling in the C18 and C19. Numerous alterations were made in the first half of the C18 (including the lych gate and sundial), which are recorded on tablets outside the building and a brass plaque inside on the nave N wall. The nave roof (since probably replaced) and the present arcade are dated 1739. The round-headed N doorway is dated 1750 and was probably contemporary with round-headed aisle windows that were replaced in 1873-7. Another tablet is dated 1746, and may refer to the building of the tower, which is approximately of this date. The church was restored 1873-7 by G E Street. Street moved the chancel to the E end of the N aisle, and probably rebuilt all the roofs. He added the S porch, and also provided Perpendicular detail to the S aisle windows, replacing C18 round-headed windows, and the Tudor-Gothic windows in the nave N wall.

Perpendicular style church comprising a nave and chancel under a single roof and with W tower, and a parallel S aisle under a separate roof with S porch. Of rubble stone with lighter freestone dressings and slate roof with overhanging eaves and behind coped gables on moulded kneelers. The aisle has a porch set back from the L end, which has a segmental pointed arch with 2 orders of chamfer. The doorway to the aisle has a wide single chamfer and moulded 2-centred arch, and a boarded door with strap hinges. The S windows are 2-light C19 replacements, 1 window L of the porch and 3 to the R. Beneath the window R of the porch are 2 stone tablets. The tablet to the R is no longer legible while on the L the tablet is dated 1746 and records improvements to the church by Thomas Jones, vicar, and Michael Hughes & Thomas Parry, churchwardens. The easternmost window has a tablet lower L in low relief but hardly legible, while lower R is a shield in low relief with heraldic lions above the tomb of Sir Peter Mostyn (d.1605). The tomb is a low chest tomb with a Latin inscription band below the moulded cornice of the cap stone.

The E windows are C15 with later restoration, and comprise a 5-light window with hood mould and head stops to the aisle, and a 4-light chancel window. The N wall has mainly square-headed Tudor-Gothic windows. From the E end are 4 windows alternately of one and 3 lights, then a late medieval or C17 3-light mullioned window with sunk spandrels and round-headed lights. Next R is the N door, which is round-headed, the head inscribed 'Edward Foulks, William Jones, Churchwardens 1750'. The doorway has a boarded door with strap hinges.

The W wall of the nave has cusped lights flanking the narrow tower. The tower is 2 stages, with a splayed base, tall lower stage, and narrower upper stage with pyramidal stone roof. It has round-headed bell openings in the E and W faces, while the N and S faces have small triangular-headed openings. The W wall of the aisle has a lean-to boiler room, above which a re-used stone set into the wall is carved with Norman relief decoration.

The nave has a 5-bay collar-beam roof strengthened by diagonal struts of low pitch. It is dated 1739 by a plaque on the N wall but does not follow the bay structure of the arcade, also dated 1739, in the spandrels of which are corbels of an earlier roof. There is no structural break between nave and chancel, but the latter has a C19 3-bay arched-brace roof with cusped diagonal struts, and a moulded cornice and boarded underside. The 6-bay arcade has elliptical arches and octagonal piers with moulded capitals. The bay at the W end was added in 1877, the remainder are dated 1739. The S aisle has a C19 9-bay arched-brace roof on wooden corbels, which are shield-bearing on the S side. Above the collars are cusped diagonal struts. In the spandrels are corbels of an earlier, lower roof respecting the bay structure of the arcade. (The E end of the S aisle is now a vestry.)

The octagonal font is probably C15. It has relief quatrefoils and arches around the bowl with saltire crosses to the underside, while the splayed stem has cusped blind arches. The polygonal wooden pulpit, probably C18, has serpent-headed brackets to the cornice. The choir stalls are C19. The back row has moulded arm rests, while the front row has cusped blind arches to the bench backs. The sanctuary is laid with decorative and encaustic tiles. The C20 communion rails are enriched with fruit and foliage in the spandrels of ogee arches.

The E windows of nave and aisle have fine late medieval stained glass said to have been brought from Basingwerk Abbey, and restored in 1877 by J Bell. Originally conceived for a 5-light window, the 4-light chancel window has figures of an unnamed bishop, and Saints Catherine, James and Lawrence, while the central image of the original composition, the crucifixion, is in the S aisle E window. In the nave N wall is a figure of St Barnabus dated 1979 by Doritie Kettlewell of London.

There are numerous memorials. The earliest is an ex situ grave slab set into the floor against the S wall of the S aisle engraved 'Hic Iacet Gruffyd Fychan', the father of Owain Glyndwr. A fragment of a C14 cross slab is in the chancel S wall. The remainder are mainly simple wall tablets of the C18 and C19. These include, in the S aisle, tablets commemorating the Morgan family of Golden Grove, the earliest being late C17 but not legible. Others are Edward Morgan (d.1794) by John Forrest of Liverpool, Edward Morgan (d.1831) by W Spence of Liverpool, and Edward Morgan (d.1861), a colonel in the Merioneth Militia, by W T Hale of London. Also in the S aisle is a marble tablet to John Douglas (d.1839) of Gyrn Castle, by Blackwell of Cheltenham. The W wall of the aisle has a plain tablet to Edward Maurice (d.1765) and his family, and Thomas Parry (d.1733) of Berthymaen and his family, with heraldic crest. Another tablet commemorates the crew of the Point of Ayr lifeboat, all of whom were lost when the lifeboat was wrecked in 1857. In the nave is a marble tablet to Barbara Owens (d.1729) with Tuscan pilasters and putto beneath, while a freestone tablet to Thomas Whitehead (d.1804) has fluted pilasters and ball finials. In the nave N wall is a freestone 1914-18 war memorial.

Listed grade II* as a substantial medieval parish church with Perpendicular character derived from C18 remodelling and C19 restoration, and with a good range of fittings and memorials.