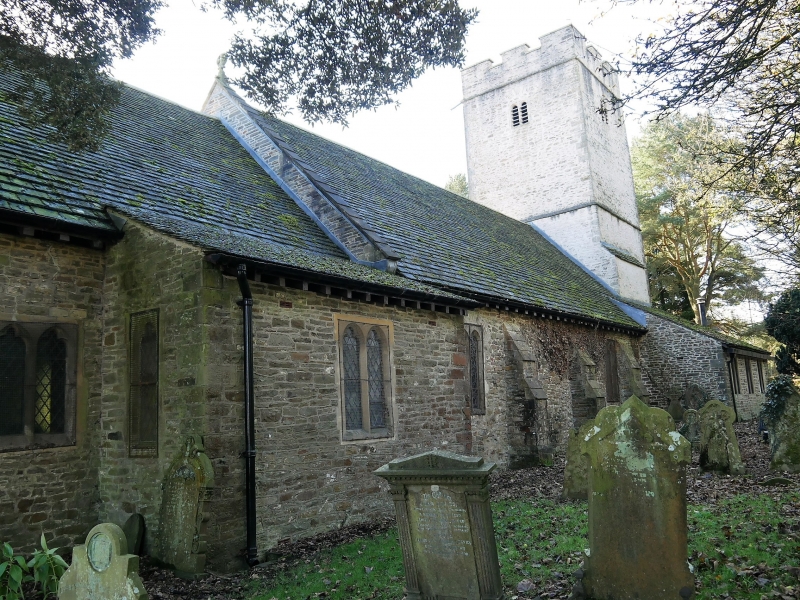 Location: Fronting the main crossroads in the village centre, within a churchyard which backs onto the site of Gaer Fawr, a Roman Fort.

Medieval church adjacent to an important Roman fort; a Roman building is reported from the churchyard. St Catwg c 500-570 is an Early Christian saint and is believed to have occupied the nearby Capel Gwladys (Gwladys traditionally his mother) in c 530 and a C10 stone from here is housed in the church. First priest for this church recorded 1266. Jasper Tudor, uncle of Henry VII and Lord of Glamorgan, donated a peal of bells to church which survived until C17. Parish at one time provided richest income from tithes in the Llandaff diocese. Edward Lewis (d 1728), commemorated here, left fortune to charities which led to the foundation of Lewis School. Roof collapsed 1866. Building restored by Charles Buckeridge for the Revd Gilbert Harries, rector, in 1867-8 and timber came from the latter's estate He promoted immersion fonts in churches to offer an alternative to the locally popular Baptist rite. He was also responsible for building Pontlottyn church near Rhymney. Windows are all believed to have been restored at this time except at N nave. Plaster removed 1903. Further vestry added 1931; existing Lady Chapel was formerly clergy vestry. Gelligaer is one of a group of large northern Glamorgan parishes with medieval hilltop churches, the pattern surviving the later industrialisation of the valleys: original extent of parish was 16,000 acres (6,475.2 hectares).

Parish Church. Plan of W tower, nave with S porch and N aisle, slightly narrower chancel, N vestry and organ chamber. Built of rubble with ashlar dressings, stone slate roof with shallow coping, terracotta ridge tiles, decorative to chancel, and apex crosses. Tower of 2-storeys has embattled parapet with string course with small gargoyles; below are the small paired, arched, louvred belfry lights; clock face to S with string course below; small square lights to tower chamber below; further plinth string course at base; W elevation shows the fomer line of a steep pitched porch roof; pointed arched chamfered W opening with broach stops under a relieving arch, unused since ground level is now substantially lower. SW window of 2 trefoil-headed lights. S porch has kneelers, a wide four-centred chamfered arched doorway with broach stops, no side windows; inside is a flag floor, stone benches to sides, renewed barrel roof, earlier pointed-arched S doorway which is chamfered with broach stops and voussoirs. S nave has 3 windows with narrow trefoil-headed lights, triple either side of porch and 4-light at SE to light former rood screen; buttresses with offsets are at each corner and separate the two easterly bays; attached to wall at SW is a monument to William Phillips died 1807. Chancel has two similar smaller 2-light windows and a blocked priests' door to S; E window is 3-light with geometric tracery under a hoodmould; C18 and C19 slabs against or attached to chancel wall; similar 2-light window to N chancel. Later vestry attached at NE has matching windows; N nave with two 2-light windows, one left unrestored, and similar buttresses, one overlapping a blocked arch; low pitched roof to later NW wing with matching windows; offset to the tower above.

Listed as a restored medieval church on an important historic site.