Tregunter, including forecourt railings and gate 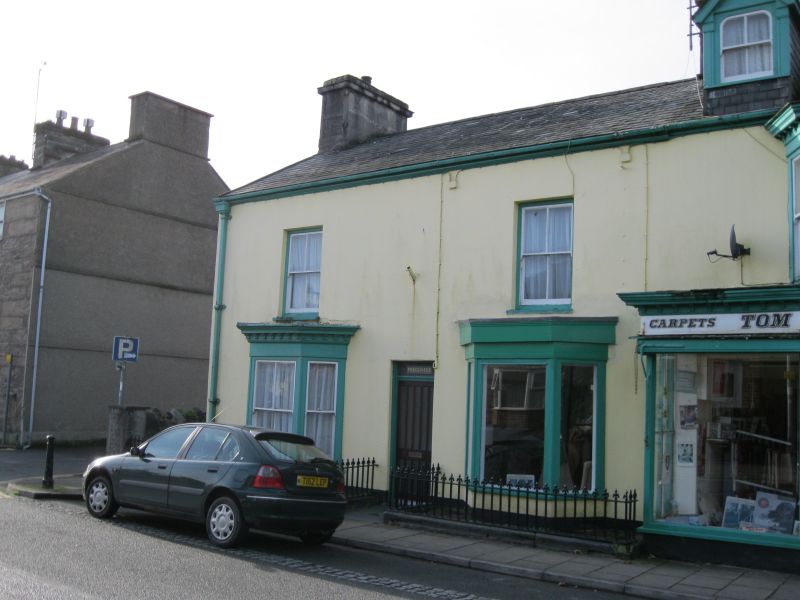 Location: At the S end of a row of terraced houses.

Lombard Street, just off Cornhill where the first wharf opened in 1824, was part of the commercial centre of the port of Porthmadog. Nos 4 and 5 Lombard Street were built in the 2nd quarter of the C19 and are shown on the 1842 Tithe map, 1871 Tremadog estate plan and 1888 Ordnance Survey. Tregunter (named after the house in Breconshire owned by Porthmadog's owners, the Roche family) was later altered by adding bay windows and forecourt railings. No 5 has a shop front probably added in the early C20.

A 2½-storey double-fronted house (No 4) and shop (No 5) of scribed roughcast front painted cream, and slate roof. No 4 has rendered end stacks, No 5 has a stone stack on the R side. No 4 has a half-glazed door, incorporating coloured glazing and the figure of a sailing ship, under an overlight, flanked by canted bay windows, of which the L-hand has a 4-pane sash, and the R-hand a replacement window (and now part of the adjoining shop). It has 4-pane sash windows in the upper storey. In front of the house are cast iron forecourt railings on a dressed slate plinth. On the L side is a terminal pebble-dashed pier. On the R side the railings return against the corner of the shop window.

The L gable end is pebble-dashed. It has a 2-pane sash window lighting the stair and a small attic window to the R. A lower 2-storey rear wing (No 4a) has a central door flanked by 4-pane sash windows and replacement top-hung casements in the upper storey.

No 5 has a shop front with large single-pane bay windows, incorporating original mullions and thin transoms in the returns, between recessed replacement half-glazed doors. Above is an awning and then the fascia, which has modern lettering, and a cornice incorporating a moulded billet frieze. In the upper storey is a canted oriel window with 4-pane sash and 2 gabled dormers have 4-pane sash windows and slate-hung sides.

The rear of No 5 has a 4-pane sash window under a gable in the upper storey, to the L of which is an added lower 2-storey wing with stack.

Listed for its special architectural interest as a town house retaining definite C19 character and detail in the commercial centre of the port, forming a strong visual group with the adjoining No 5, and for its overall contribution to the historical integrity of Porthmadog harbour.