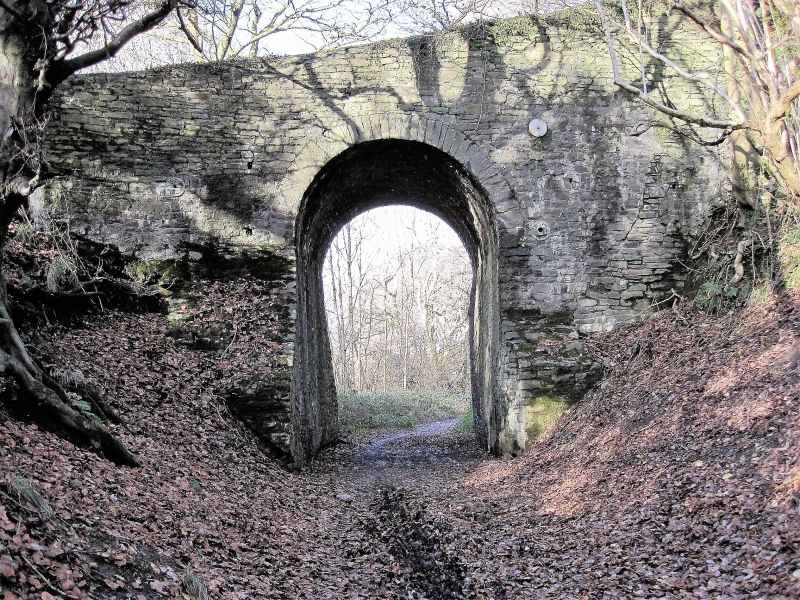 Location: Reached down a steep by-road from the old Cardiff to Merthyr road; by-road crosses the former Taff Vale Railway and the Penydarren Tramroad.

Overbridge carrying the track to Pont y Gwaith over the Taff Vale Railway and immediately adjoining the bridge over the tramway. Constructed in 1841 as part of the development of the Taff Vale Railway (TVR). The TVR was the pioneering railway route in South Wales, incorporated in 1836 and championed by leading industrialists to provide links between the coal and iron industries of the Taff valley including the existing network of tramroads and the docks in Cardiff Bay. Isambard Kingdom Brunel was appointed as its chief engineer and the first section from Cardiff to Cardiff Bay was opened in 1840. The line from Cardiff to Abercynon was constructed next in the same year, followed by the line to Merthyr the following year. It was extended from Pontypridd to Treherbert in 1856, with lines doubled in 1858, and then quadrupled from Cardiff to Pontypridd by the 1880s. It served primarily as a freight route but also carried large numbers of passenger traffic linking the industrial towns of the Taff valley with Cardiff. A number of impressive engineering works were required in the construction of the line, in particular the viaducts at Pontypridd and Quakers Yard, both listed at grade II*.

The TVR was reorganised as part of the Great Western Railway in 1922 and then British Railways after the Second World War. The decline in industry in the post war period resulted in a drop in freight traffic and the Beeching cuts of the 1960s reduced the number of passenger services offered. The early C21 has however witnessed a return of a number of passenger services on the line.

Included for its special architectural interest as a well preserved railway bridge of the mid C19, an integral part of the construction of the Taf Vale line one of the earliest lines in Wales. Also of special historic interest for its connection with the renowned Victorian engineer IK Brunel and important in the national development of the railway network which revolutionised long distance travel and leading in part to the industrial and urban boom of Victorian South Wales. Group value with the adjacent tramroad bridge.