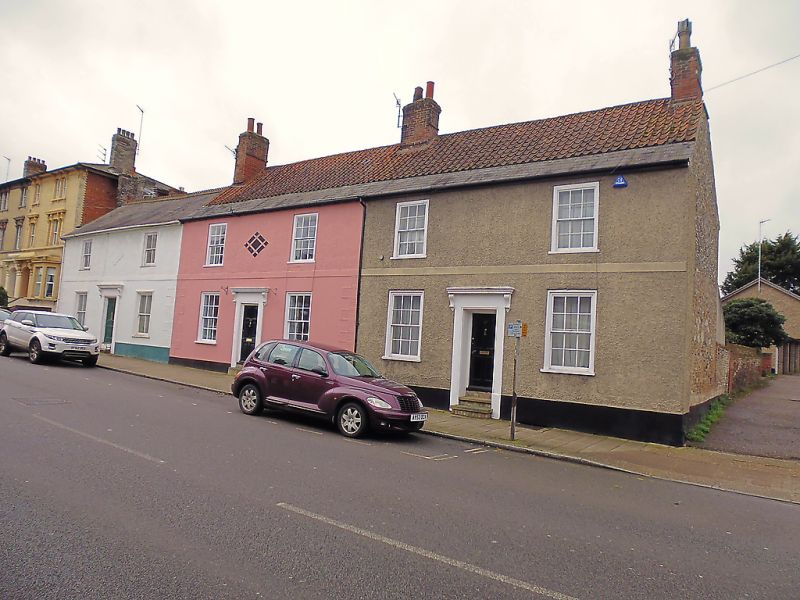 A row of 3 houses. Early C19. Partly timber-framed; roughcast
rendered fronts; No.25 has a red brick gable end and No.27
random flint with some reused stone blocks. Slate roof to
No.25 and black glazed pantiles to Nos 26 and 27 with slates
at eaves level. Nos 26 and 27 were built as a matching pair
with 2 red brick gable-end chimney-stacks and one internal
stack, all with plain shafts, slightly corbelled heads and
chimney pots.
EXTERIOR: 2 storeys and cellars. Each house has 2 windows to
each storey, all 12-pane sashes in flush cased frames. No.25
is a slightly later addition, with a lower shallower pitch to
the roof, ornamental ridge-tiles and 2 gable end
chimney-stacks; 2 sash windows with a single vertical glazing
bar in shallow moulded reveals to each storey.
When No.25 was added, all the facades were given the same
treatment, with a raised stucco band between the storeys, mock
rustication to the quoins and similar doorcases. The slightly
recessed central doors, up steps, have surrounds with plain
reveals and fascias and flat cornice hoods with console
brackets. Above the doors of Nos 25 and 26 are raised
ornamental plaster diamonds, but this and the mock quoins have
disappeared from No.27. Lean-to extensions at the rear.
INTERIOR: No.27 only inspected. Simple early C19 fittings:
dado rail in entrance corridor; fireplace surrounds with
quarter-round mouldings and roundels; stair with stick
balusters and turned newels. No features indicate an earlier
core.
Part of significant group in Northgate Street and included for
group value.