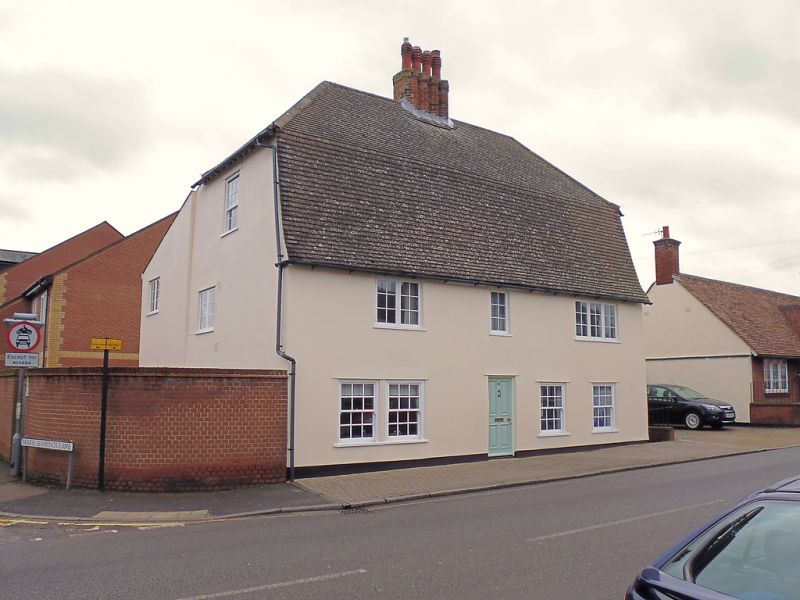 Entry Name: 96 and 96a, Northgate Street

House, now used as doctors' surgeries with a flat above.
c1600; altered in the C18 and extensively restored in the late
C20. Timber-framed with roughcast render; concrete plaintiled
roof, raised in C18, mansard, half hipped. Basically, a 2-cell
lobby entrance plan with internal chimney-stack: 4 attached
hexagonal shafts with corbelled heads, partly obscured by the
later roof-raising.
EXTERIOR: 2 storeys and attics. Mixed random fenestration.
Most windows are now C20 replacements: small-paned casements
to the 1st storey and 3 12-pane sash windows to the ground
storey; all windows with slight reveals. One half-glazed C20
door. At the rear, a 2-storey lean-to extension, basically in
red brick. The brick was formerly painted and the back wall
had areas of older random brick with a mixture of Abbey stone,
all covered since restoration by render.
INTERIOR: the main range is in 3 bays, including a narrow
chimney-bay, with some plain framing exposed: chamfered main
beams on the ground storey and unchamfered joists set flat.
The stair to the upper floors has been resited in a new porch
extension on the south side. On the 1st storey, studding and
main posts with long jowls along the front wall with evidence
of fire damage.
Upper ceilings with widely-spaced joists set on edge. The C18
mansard roof has bisected rafters and straight braces. Within
the attic the chimney-stack is of Tudor brick.