Numbers 8 to 14 (Consecutive) and Attached Railings 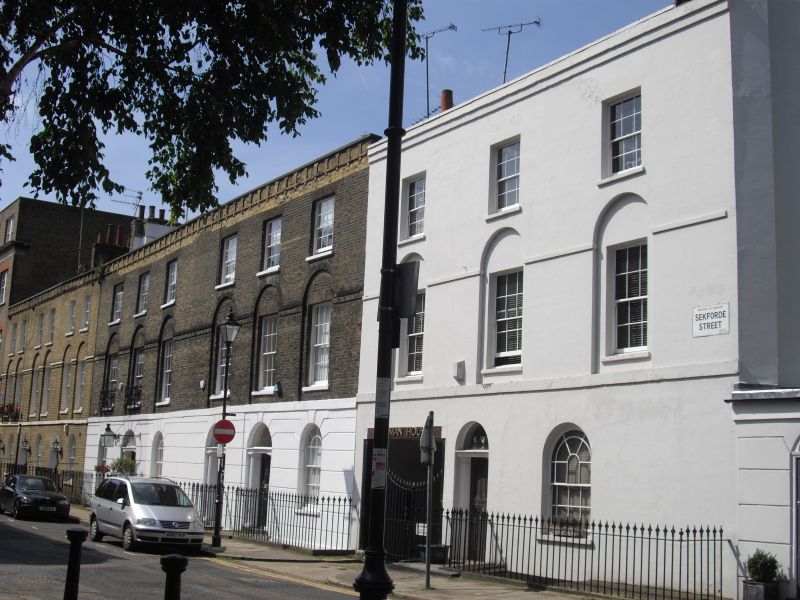 Terraced houses. 1835-40. Yellow brick set in Flemish bond,
stucco, roof obscured by parapet. Three storeys over basement,
nos 8-10, 12 and 14 two windows each, nos 11 and 13 three
windows each, no 11A apparently of one-window range. Basement
and ground floor of nos 11-12 stuccoed, the ground floor
decorated with banded rustication; nos 13-14 stuccoed all
over. Round-arched entrances to nos 8-10 with fluted quarter
columns, cornice, fanlight and panelled door of original
design; nos 11, 11A and 12 have engaged Roman Doric columns,
cornice and fanlight, no 11 having a panelled door of original
design, no 11A replacement columns of metal. No 13 has fluted
quarter columns and fanlight, and no 14 has a single-storey
extension to ground floor, with two round-arched entrances
with fanlights. Carriage entrance to no 13. Ground-floor
windows round-arched except one to no 14 is a Venetian window.
Stucco storey band. All upper windows flat-arched except one
round-arched window and one canted bay to no 14; those to
first floor set back under round arches of gauged brick linked
by a brick springing band; cast-iron balconies to nos 8 and
11. Parapet has brickwork patterned in emulation of triglyphs
and guttae to nos 8-12. Cast-iron railings to area of nos
8-10.
(Historians' file, English Heritage London Division; Eric
Willatts: Streets with a story. The book of Islington: London:
1986-).