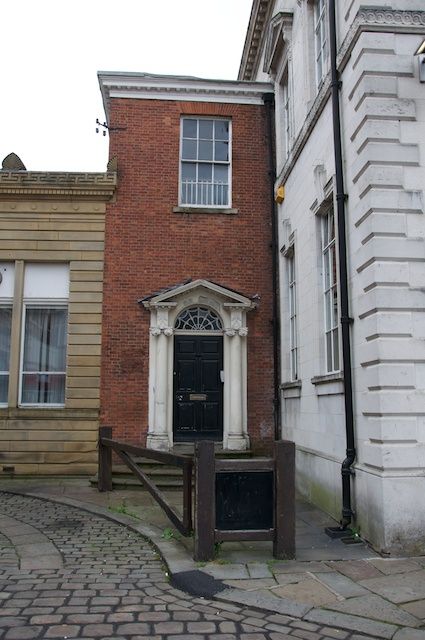 PLAN: the present bank (1913-14 remodelling) contains a banking hall, now incorporating modern, partitioned offices and banking counter, with back offices on the ground floor. The first floor has a spinal corridor with rooms to each side and is reached from the staircase in the staircase block, which has an external doorway and a staircase rising from the ground floor to a first-floor landing. The single-storey bank extension is now used as a staff room and WCs. At the rear of the building is the staircase descending from the 1890 Baillie Street building. (q.v.)

EXTERIOR: the front elevation of the bank is formed from three distinct phases. To the west, left-hand side is the single-storey, four-bay 1879 bank extension. It is designed in a severe, Greek style in ashlar sandstone with banded rustication across the entire façade. The left-hand bay is lower with a projecting, moulded eaves cornice. The main, three-bay block has a parapet entablature with dentils, an incised Greek key pattern and projecting antefixes. In the centre of this block is a slightly recessed rectangular doorway with no door surround. Stone steps lead up to the door (presently obscured by security boarding) with a round-arched overlight and a relief panel above reading BANK. The doorway is flanked by two tall, two-light mullion windows, with a smaller, two-light mullion window in the first bay. The windows share a moulded sill band, with plain square stone mullions and no window surrounds. The timber window frames have the same form shown in a 1909 photograph, but the top lights, which pivoted open with bottom hinges, have now been boarded over.

The adjacent staircase block is of a single bay and is two storeys in height. It is built of orange brick in Flemish bond with a modillioned timber eaves cornice and a shallow hipped, slate roof. The ground floor has an Ionic doorcase with attached columns, open modillioned pediment, semi-circular enriched fanlight, and a door of six field panels, with a shallow flight of bowed stone steps (historic photographs show the doorcase to have been originally located in the central bay of the adjoining house, now the 1913-14 remodelled bank). On the first floor is a sash window with a gauged brick head and stone sill. The window frame is six-over-six panes.

To the east, right-hand side is the present bank remodelled from the manager's house in 1913-14. The elevation, which projects forward, is built in a symmetrical, neo-classical style of white Portland stone. It is of two storeys and five bays with a plinth, rusticated quoining, and a parapetted dentil eaves cornice with a triangular pediment over the central three bays. On the ground floor is a central doorway with a semi-circular porch with Ionic columns and deep entablature set on a flight of shallow steps. The round-headed doorway has an enriched fanlight over the timber door, with narrow, flanking side lights with decorative glazing bars. The ground-floor bays on each side have tall rectangular windows with moulded stone frames and giant keystones. The window frames have three-by-four pane glazing. Between the first and second bay windows is a recessed niche containing a cash-point machine, with a flight of narrow steps extending left from the porch steps. The first floor has a slightly recessed central bay with a round head which extends into the pediment and contains a relief carving of a double-headed eagle. There are five rectangular windows with a guilloche sill band and triangular pedimented hoods. The central window is enriched with a relief-carved swag above. The east, side elevation faces onto Lyceum Passage and is of four bays with windows on both floors detailed in a similar way to those of the front elevation.

INTERIOR: the doorway of the staircase block opens into an inner lobby with a wide inner doorway with enriched plaster cornice and architrave and timber and glazed double doors. The single bay contains an openstring staircase with decorative iron balustrading and a ramped timber handrail. A wide round-headed arch opens off the first-floor landing into the spine corridor of the adjacent bank. At the rear of the landing is a doorway with a fluted architrave and foliate corner motifs, and a modern timber door.

The present bank has a large banking hall with delicate Adamesque plasterwork to the ceiling which is divided into a large rectangular central panel flanked by narrower panels. To the rear of the banking hall is a private office beyond a wide, shallow arch flanked by fluted pilasters and infilled with a timber and glazed screen. On the left-hand side of the screen is a fielded-panel and half-glazed door. The banking hall is now sub-divided by modern partitions and a modern banking counter.* The first-floor spine corridor has timber fielded-panel and half-glazed double doors flanked by fluted pilasters with a small-pane glazed overlight. The doorways opening off the corridor have fluted architraves and foliate corner motifs. The doors have four fielded panels with a horizontal top panel now glazed. The window at the far end of the corridor has a similar architrave and fielded-panel returns and soffit. The other windows have moulded architraves and similar panelled returns and soffits. The rear east room has a small bolection moulded mantelpiece. Many of the rooms have modern suspended ceilings.*

The interior of the 1879 bank extension has no original fixtures or fittings of interest. It has a modern suspended ceiling.*

* Pursuant to s.1 (5A) of the Planning (Listed Buildings and Conservation Areas) Act 1990 ('the Act') it is declared that these aforementioned features are not of special architectural or historic interest.

In 1819 a branch of the private bank of John Rawson, William Rawson & Christopher Rawson & Co moved to occupy an annexe to a c.1800 two-storey house facing onto The Butts and leased from the local Vavasour family. Historic photographs show the house to have been of two storeys and five bays, built of brick with a hipped slate roof. It had a central doorway with an elaborate doorcase with six-over-six pane sash windows on the ground and first floors. Above the doorway was a glazed door opening onto a small balcony. The house continued to be used as a private residence, lived in by the bank manager, Thomas Rawson and his family.

The business was sold in 1827 to Clement Royds of the Royd family of Falinge, an influential and established local family who had made their wealth in the woollen trade. Royds was a notable public figure, becoming High Sheriff of Lancashire in 1850 and 'canal banker' for the Rochdale Canal, an engineering feat of the Industrial Revolution, being the first trans-Pennine Canal. In 1854, Clement died and was succeeded by his son, William Edward Royds, who in turn was succeeded by his son Sir Clement Molyneux Royds.

In 1879 construction began on the single-storey, Greek–style bank extension to the west. The architect was James Cheetham, who had designed the Pioneer Central Stores in 1867. Two years later, in 1881, Clement Royds sold the bank to Williams Deacon and Manchester and Salford Bank, though remaining chairman of the newly merged bank. Deacon subsequently built 10, 12, 14 and 16 Baillie Street in 1890, a listed Grade II building (q.v.) with two shops and offices over. At the right-hand end (No.10) the building incorporated a grand doorcase opening onto a flight of stairs which descend down to link this building with the bank, thus providing pedestrian access from Baillie Street.

In 1913-14 the original house was converted to bank use. It was extended forwards and the original brick façade replaced by a classical design in white Portland stone by Cecil Jackson. Historic photographs show that the original house doorcase was repositioned from the central bay of the house to the recessed, brick staircase bay to the left, which originally had a hung-sash window on both ground and first floors. The first floor of the redesigned bank is only accessible via the openstring staircase in the staircase bay and it is possible that this was also repositioned from the former house, as the area it occupies is that of the original banking chambers of the complex.

The 1914 bank continues to operate as a bank. The 1879 single-storey bank extension is now used by staff.

The former Royds Bank (now the Royal Bank of Scotland), The Butts, comprising a c.1800 staircase block, an 1879 bank extension by James Cheetham, and a 1913-14 bank chambers by Cecil Jackson, is listed at Grade II for the following principal reasons:
* Architectural interest: as a bank of long standing with three phases of distinctly different appearance, a c.1800 sub-domestic block, a well-designed 1879 extension in a clean-cut Greek Revival style, and an impressive, early-C20 neo-classical bank chambers;
* Historic interest: the bank's phasing clearly shows the historic development of these institutions, the earliest c.1800 block demonstrating the discreet nature of C18 and early-C19 banks, which were usually associated with private houses, in contrast to the purpose-built, Greek Revival extension of 1879, a style favoured by the Bank of England, and the grand neo-classical bank chambers of 1913-14, both architect designed and clearly embodying a reassuring image of longevity, confidence and reliability to clients;
* Materials: all three phases are constructed of high-quality materials displaying fine craftsmanship in their detailing, the c.1800 block of brick in Flemish bond, the 1879 extension of sandstone ashlar and the early-C20 bank chambers of fine, white Portland stone.