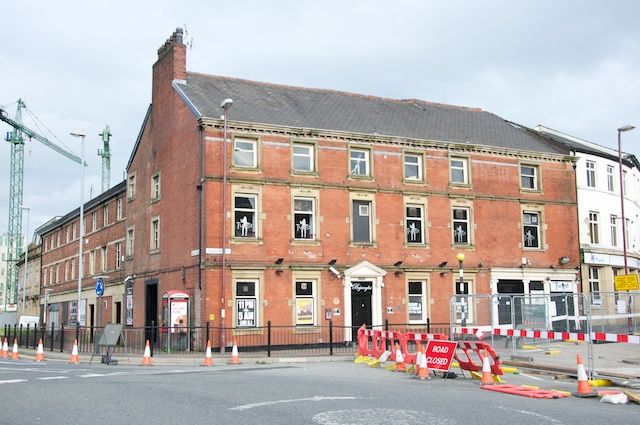 HISTORY: it was built between about 1764, when the vicar gained powers to grant building leases, and 1795, as a town house for Thomas Smith (1743-1806), a wealthy woollen merchant who built fulling mills behind it. It was later a school, then from 1818 the Wellington Hotel. Between 1825 and 1839 the police commissioners met here. In 1844, the building was still owned by the Smith family and the hotel was run by Elizabeth Richardson.

DETAILS: brick, appearing to be of various dates, the front appearing to have been re-faced, stone dressings and slate roof. Five bays, double-pile with three storeys and an additional wider bay to the right with a former bar entrance. Stone plinth, continuous ground and first-floor cornices and a modillion eaves cornice; steeply pitched roof. Pedimented Ionic doorcase as well as the entrance in bay six which has four Ionic pilasters and entablature. Window openings with moulded architraves, the ground floor having pulvinated friezes the first and second having sill blocks. Ground and first floors have Victorian sashes, otherwise glazing is C20. The original glazing pattern and some original brickwork is seen in the gable.