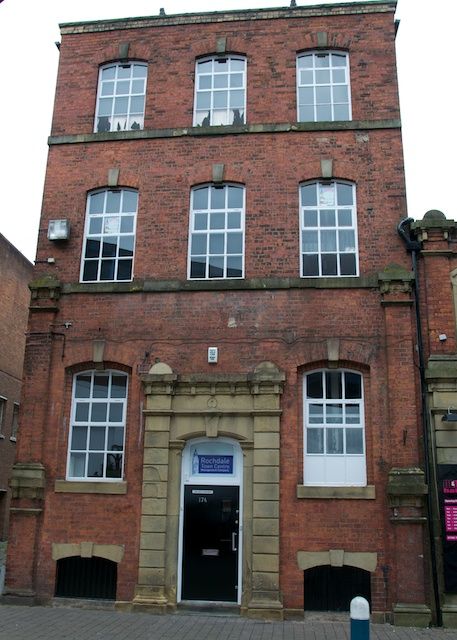 Entry Name: 17A and 19 Baillie Street

PLAN: No.17a: rectangular with narrow three-bay frontage on Baillie Street. Three storeys raised over a partial basement with a full-height loading bay in the centre of the five-bay side elevation. Wide loading bay to right-hand side of rear elevation opening into tall ground-floor bay with two upper storeys over. Principal staircase in south-east corner adjacent to central front entrance doorway. Inserted rear staircase in north-west corner.
No.19: rectangular with modern rear extension and three-bay frontage on Baillie Street. Two storeys over basement with left-hand entrance doorway leading into lobby with stair position beyond.

No.19: the front elevation is of three bays and two storeys over a basement, which is only apparent by a rectangular grilled area set in the pavement to the right-hand side of the elevation. The ground floor is faced in ashlar stone and the first floor is built of orange brick with stone dressings. The bays on the ground floor are defined by giant pilasters of chamfered stone which support an entablature with modillion cornice at first-floor level. In the left-hand bay is a doorway with two windows to the right, all with segmental-arched heads and giant keystones. Beneath the windows are panelled aprons. The present single door has been adapted from the pair of panelled, part-glazed doors shown on historic photographs, and the overlight blocked. The window frames are modern replacements; historic photographs show that all the windows were sashes. The first floor has a brick parapet with a small, central, triangular pediment. The bays are defined by brick pilasters with stone bases which rise to support a stone modillion eaves band and stone parapet coping with semi-circular finials over the pilasters. The central window is round-headed with a segmental-arched head window to each side, all with moulded stone surrounds and giant keystones. The window frames are all modern replacements.

INTERIOR: No.17a: no original partitioning for offices or a reception area remain on the raised ground floor and the original open-plan upper floors for the storage of goods are presently sub-divided by modern partition walls. Adjacent to the main entrance doorway is the principal staircase with turned timber newels, moulded handrails, and decorative cast-iron balusters, some presently boarded in. The rear service bay retains a stone flag floor. The rear staircase is a modern insertion.

No.19: there are no original fixtures or fittings of interest remaining. The cross walls between front and rear rooms have been removed on both floors.

The modern two-storey extension to the rear of No.19 Baillie Street is not considered of special interest. It is excluded from the listing.

Baillie Street was laid out as part of a speculative development in the 1830s on the edge of the medieval town in an area previously occupied by gardens, alleyways and a bowling green. No.17a, a warehouse, and No.19, a showroom or office, are first shown with the service road to their rear on the 1:2500 Ordnance Survey map of 1890, replacing two earlier buildings on the site.

The numbering of buildings on Baillie Street has altered over the years and so there is a degree of uncertainty as to which occupants were in which buildings. In 1885 Worrall's Directory lists a J S & J Greenhalgh at No.19b Baillie Street, described as a warehouse. The Greenhalghs were flannel manufacturers with a mill called Roach Mill on Shade Walk. The 1894-5 Duncan Directory lists the Inland Revenue at No.19 Baillie Street and Greenhalghs at No.19a. By 1916 the present numbering system had been adopted and Clegg's Directory lists HM Customs and Excise at No.19 and Greenhalghs and another company, Garside & Co, in No.17a. This suggests that although Greenhalghs may have originally have occupied both the warehouse and adjoining showroom or office building, this did not continue for long and while the company retained the warehouse, the Inland Revenue then occupied the adjoining building as a tax office.

The warehouse at 17a Baillie Street continued in this use during much of the C20. It was listed at Grade II in 1985. Subsequently in the 1980s it was converted to a public house, though is no longer in use as such. No.19 remains in use as a commercial premises.

No.17a & No.19 Baillie Street, Rochdale, of late-C19 date, are listed at Grade II for the following principal reasons:
* Historic interest: the warehouse (No.17a) is an increasingly rare example of a textile warehouse in an important central location in Rochdale, which is complemented by the contemporary attached showroom (No.19) for the selling of the stored goods to wholesale customers;
* Architectural interest: the two buildings are designed as a set-piece sharing common architectural details, though the brick warehouse is plainer and more functional while No.19 has a greater elaboration to its main façade, which incorporates an ashlar-stone ground floor and decorative, pedimented parapet, as was typical of a showroom designed to catch the eye and entice customers.