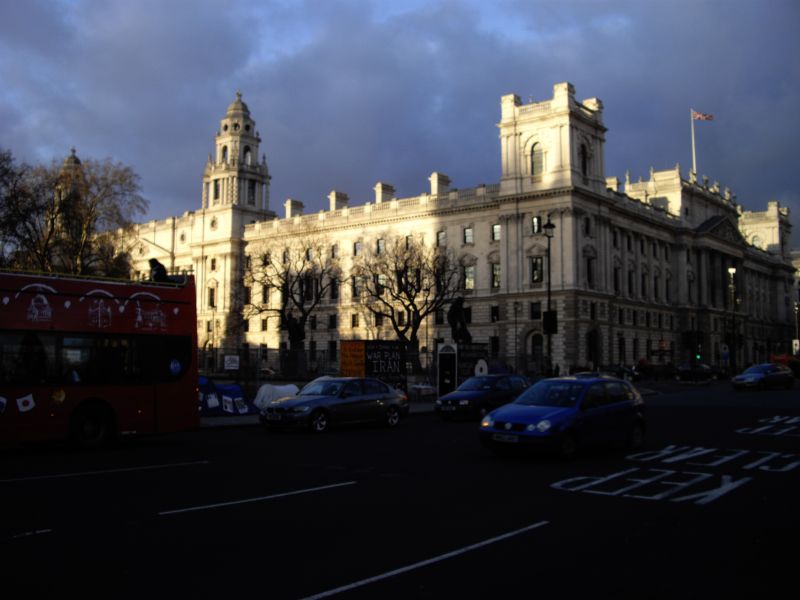 Parliament Square - Great George Street front has coupled column portico above triple archway with pediment set against attic which has oculi in flanking sections of the recessed centre; the three tier, Wren inspired cupolas, the flanking pavilions have diagonally set rusticated columns to their main stages; the long ranges between the angle pavilions are not articulated by the Corinthian order on their upper floors but have the alternating pedimented second floor windows, two of them as Venetian windows with carved festoon and "linge" enrichments to the windows above; the Corinthian order reappears in the four-window west extension.

The Park front resembles that to Whitehall but with three storey quadrant corners in place of angle pavilions; they have engaged Ionic colonnades and echo Scott's adjoining Foreign Office. At the east end of King Charles Street is a triple archway (contains passage-way link in its attic to the Foreign Office) with engaged Doric columns and large scale figure sculpture enrichment by J. R Mountfield. Balustraded parapet to basement area, extended out to Storey's Gate, to link with small stone kiosk and terminating in large corniced pier crowned by an urn. The main circular courtyard has arcaded ground floor and an engaged Corinthian order above. The interior has a large, double branching grand staircase; the reinforced concrete basement at the Park end contains the "War Rooms", Sir Winston Churchill's flat and office "bunker" during World War II.