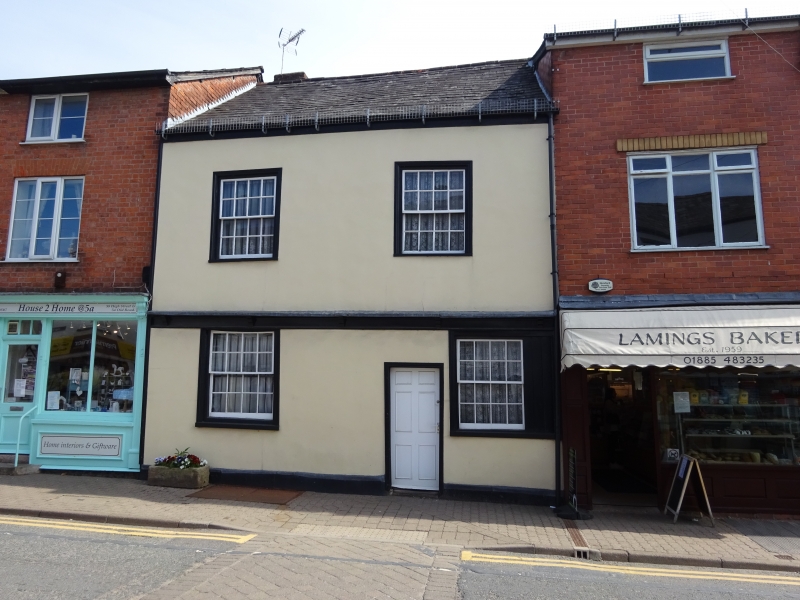 GV II
A timber-framed, two-storey house with origins in the C16 or C17, largely remodelled in the C18.

PLAN: The building is orientated north-west to south-east, parallel with the High Street. It has two bays and is one room deep. It is likely to have originally been a single build with neighbouring No. 52 (listed at Grade II).

EXTERIOR: The principal façade is rendered and has a cornice at first-floor level. There are four identical hornless, eight-over-eight sash windows, flush with the façade. Those on the left are vertically aligned, whereas on the right the ground-floor window and door are irregularly arranged beneath the upper window. The rear has exposed timber framing with various infill, half of the rear elevation is covered by the extension to the rear of the neighbouring building.

INTERIOR: The interior was not inspected for the purposes of this assessment, but this description has been informed by the Insight Historic Buildings Research report (2009). There is a jetty plate and large chamfered beams running from the front to the back of the building at both ground and first-floor level, one of which has a double-bar scroll stop.

HISTORY: Bromyard is a small market town that was first recorded in circa 840. No. 54 High Street is situated on one of the principal thoroughfares in the town which was known as Novus Vicus in the late C13 and recorded as Newe Streate in 1575. The street appears to have been fully built up by the early C17, though some of the plots have been re-developed since that time.

No. 54 High Street is likely to date from the C16 or C17, based on stylistic details of the timber frame and roof structure. No. 54 and No. 52 High Street seem to be of a single build, later subdivided.

REASON FOR DESIGNATION: No. 54 High Street is designated at Grade II for the following principal reasons:
* Architectural: a well-preserved example of a modest, but pleasant urban building retaining some good-quality architectural features, such as the the double-bar scroll stop
* Early date: the building dates from the C16 or C17 and retains much of its historic fabric
* Intactness: a substantially intact C18 facade
* Group Value: with its immediate neighbours and many other listed buildings elsewhere in the High Street