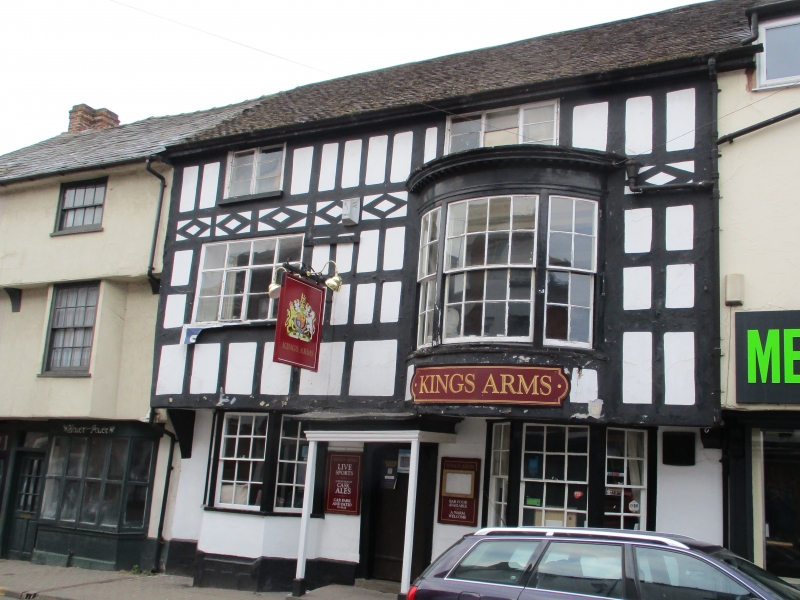 GV II
A public house and a shop with domestic accommodation, dating from the C16 and C17, with later developments.

MATERIALS: The building has timber framing to its principal ranges, which are largely finished with stucco. There are brick additions to the rear. It has a tiled roof with brick chimney stacks.

PLAN: The building has one range running north-west to south-east, parallel with the road. The pub portion of this range has two bays, the shop has one. There is a three-bay range projecting perpendicularly to the rear, as well as various later extensions.

EXTERIOR: The principal elevation comprises three bays and three storeys; the two on the left are the pub, the other the shop. It is jettied at first-floor level. The pub section of the façade is stuccoed and painted in a black and white timber-frame pattern. At ground-floor level there is a central front door with canted bay windows to either side. The doorway has a moulded hood positioned beneath the jetty, supported by a plain, slim column on either side. The ground-floor windows are hornless six-over-six sashes to the fronts of the bays, and two-over-two on the returns. At first-floor level, on the right-hand bay is a bow window with curved hornless sashes and a moulded cornice. On the left-hand side of the first floor is a fixed window with twelve panes separated by narrow glazing bars; two of the panes form a casement. At second-floor level there are casements of three lights with horizontal glazing bars. The top of the windows meet the eaves which project slightly. The shop section to the right is plain stucco and has a C20 frontage: there are five large glazed panes separated by narrow glazing bars, below is the plinth with a fielded panel. There are two modern doors to the right, giving access to the shop and flat. At first-floor level is a C20 casement window, at the second floor are two dormers with modern windows and flat roofs. There is a notable wide brick chimney stack to the rear range.

INTERIOR: The interior was not inspected for the purposes of this assessment, but this description has been informed by the Insight Historic Buildings Research report (2009). Evidence of the timber frame is visible throughout both sections of the building and in the roof space. There is a significant amount of C17 panelling within the pub. The beams within No. 49 have wide chamfers and stepped stops. There are two jowl posts positioned in such a way that suggests there was once a front-facing gable.

HISTORY:
Bromyard is a small market town that was first recorded in circa 840. The King's Arms, Nos. 45-47 High Street and No. 49 High Street are situated on one of the principal thoroughfares in the town which was known as Novus Vicus in the late C13 and recorded as Newe Streate in 1575. The street appears to have been fully built up by the early C17, though some of the plots have been re-developed since that time.

REASON FOR DESIGNATION: The King's Arms, Nos. 45-47 High Street and No. 49 High Street are designated at Grade II for the following principal reasons:

* Architectural interest: an attractive timber-framed, jettied building with an elaborate oriel bow window
* Historic interest: it has a very early date, originating in the C16
* Intactness: it retains its historic façade, much of the timber frame, and C17 panelling
* Group Value: with many other listed buildings elsewhere in the High Street