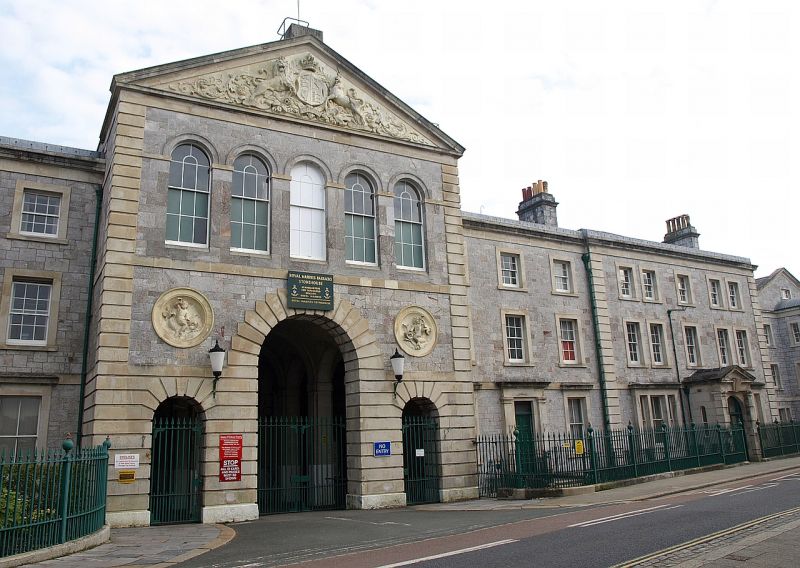 INTERIOR: contains former apartments and offices with 6-panel
doors and panelled shutters with plaster cornices, some stone
fireplaces boxed in; a stone cantilevered open well stair to
the S of the through arch with iron stick balusters. 5-bay
through arch with round-arched vaults, and entrances each side
to offices and guard house; above, former school, now chapel
has a shallow barrel vault with plaster decoration, and late
C19 fittings including an organ.
HISTORY: originally housed the 1st and 2nd Commandant either
side of the archway, with first-floor schoolroom, now chapel,
above it, 24 subalterns in the N end range, and office and pay
office off the inner arcades. The drawings were signed by
Greene, who was responsible for several important buildings in
the royal dockyards including the Sheerness boatstore. Forms a
strongly articulated and richly decorated range with the
contemporary additions to the N and S, extending to the W and
closing the C18 parade ground.
Stonehouse is the oldest and most important group of barracks
in england not forming part of a fortification, a very rare
example of C18 planning, and a complex of great historic
value.
(The Buildings of England: Pevsner N: Devon: London: 1989-:
655; Random Records of the Royal Marines: Eastney: 1931-: 184;
Dixon Lt Col R: Two Hundred Years of Stonehouse: 306-311;
Plans: 1860-: PRO/ADM/140/309-310).