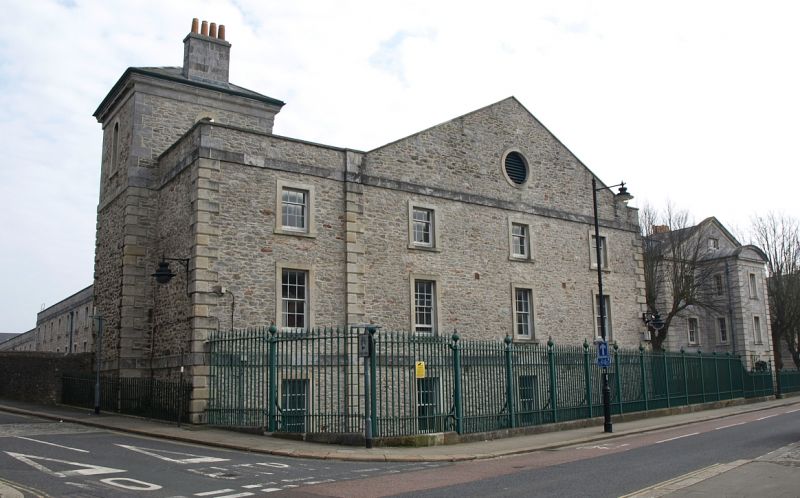 Formerly known as: N & E Blocks, Officers Mess, Dining Hall &
Single Officers Accom. DURNFORD STREET Stonehouse, R M
Barracks.
Barrack block at Marines barracks. c1860, designed by Colonel
G Greene, Director of the Admiralty Works Department; altered
late C20.
MATERIALS: Plymouth limestone rubble with limestone dressings;
dry slate roofs on 2 levels, hipped end on right and coped
gable ends to slightly taller later block on the left, all
behind a coped rubble parapet over a dressed stone band; 2
truncated stone stacks.
PLAN: single-depth plan, the left-hand part slightly broken
forward.
EXTERIOR: 3 storeys over basement; 17:12-window range. Horned
sashes with glazing bars replacing original hornless sashes,
all within plain stone architraves; bands above basement and
ground floor. Segmental-arched doorways and enclosed stone
porch with parapet and side windows, on left. To the rear at
the W end is a square stair tower with a pyramidal roof.
INTERIOR: not inspected but reported to have been rebuilt
internally.
SUBSIDIARY FEATURES: late C19 latticed and scrolled
wrought-iron railings surrounding forecourt and flanking steps
up to doorways.
HISTORY: built to match the 1783 barrack, after the former N
officers' wing was demolished when the barracks was enlarged
by Greene in the 1860s, to enclose the C18 parade ground.
Originally with single-depth rooms flanking entrance stair
halls, with sergeant's mess and library at the W end and men's
day room and billiard room at the E. Stonehouse is the
earliest and most important barracks in England not forming
part of a fortification, a rare example of C18 planning, and a
complex of great historical value.
(The Buildings of England: Pevsner N: Devon: London: 1989-:
655).