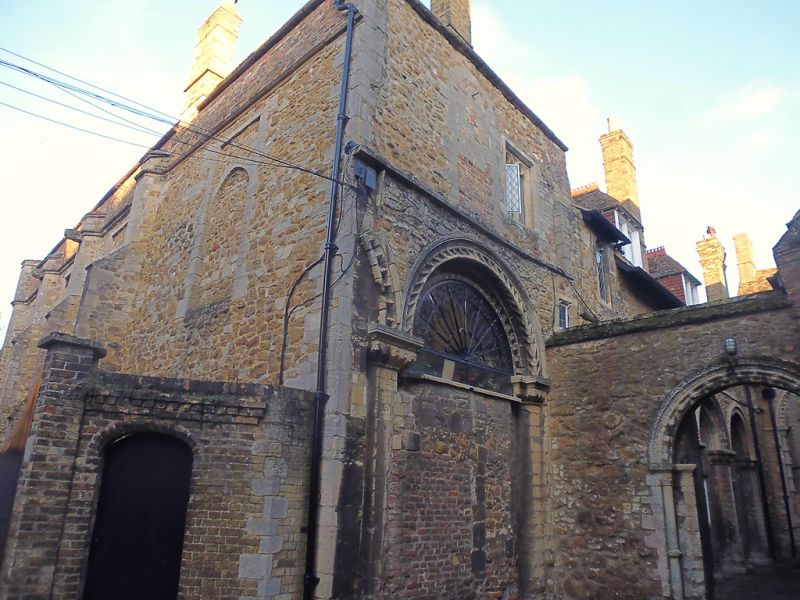 GV
I
The Painted Chamber now, a boarding house of King's School was built in the early C14 by Sacrist Alan of Walsingham for his own occupation. It is built of Carr Stone rubble with Barnaok (or similar) stone dressings and has much brick patching and brick parapets. The hall was raised above a vaulted undercroft. On the south side (on Infirmary Lane), there is a bay of the C12 Infirmary arcade, with richly ornamented arch and capitals. The east and west fronts are divided by buttresses with splayed internal angles. The windows are squared, with two lights with trefoil arched heads. The north west corner has angle buttresses rising to an octagonal turret at parapet level and the north east corner has an octagonal staircase tower rising above a massive buttress with three offsets. A heavy chimney breast projects on the north side above a single storey projection with a lean-to roof.

In the interior, at the south end, there is a fine C12 doorway with a semi-circular tympanum, originally an external doorway leading from the north aisle of the Infirmary to the monks cemetery.

The Dark Cloister, Powcher's Hall, the Painted Chamber (Walsingham House), the Chapel of the Infirmary (Deanery), The Black Hostelry and Cellarers Chamber, and Cellarers House (Boarding House of King's School) form a group. See also general group description under the Cathedral of The Holy Trinity.