The Black Hostelry and Cellarers Chamber 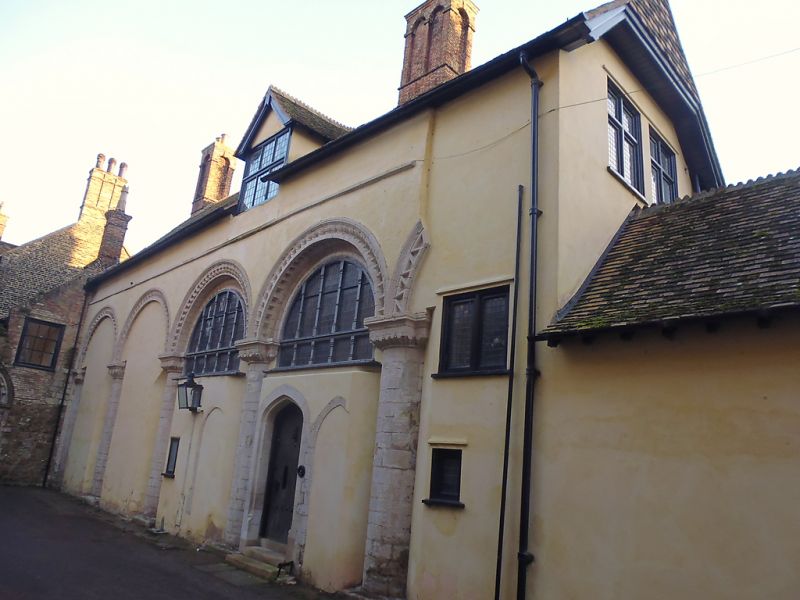 THE COLLEGE
The Black Hostelry and Cellarers Chamber

(formerly listed as part of residences incorporating remains of Infirmary including Chapel).

GV
I
The Black Hostelry extends to the south at the east end of Infirmary Lane, with the Cellarers Chamber adjoining on the east side (now the Chapter office). The Black Hostelry was built circa 1291-92 to accommodate visiting monks from other Benedictine monasteries.

The vaulted undercroft is of the early C13 with ribbed vaults rising from central columns with moulded caps and bases. The lower storey is of Carr stone rubble with Barnack (or similar) stone dressings and the upper storey is timber-framed and plastered on the south and east sides and stone on the west side which is unfenestrated. A massive C15 red brick chimney stack with some stone rubble at the base projects on the south side, with four offsets and three octagonal shafts with moulded caps and bases. The north end has remains of the C12 Infirmary arcade. The windows generally are two and three lights with arched heads and squared hood moulds.

The interior has medieval features including a turn or opening between servery and halls to enable food to be passed without the server being seen, a C15 doorway and a C13-C14 King Post roof with moulded caps and bases. Roof tiled, with three C19 gabled dormers on the east side.

The Cellarers Chamber, now the Chapter Office, adjoins the Black Hostelry on the east side. It was built into the south aisle of the Infirmary in the C15. Two storeys and attics two window range. The ground storey windows have two lights with plate tracery and the first storey windows are mullioned and transomed with treoil arched heads to the lights. A central buttress separates the windows. Roof tiled, with two C19 gabled dormers.

The Dark Cloister, Powcher's Hall, the Painted Chamber (Walsingham House), the Chapel of the Infirmary (Deanery), the Black Hostelry and Cellarers Chamber, and Cellarers House (Boarding House of King's School) form a group. See also general group description under the Cathedral of The Holy Trinity.