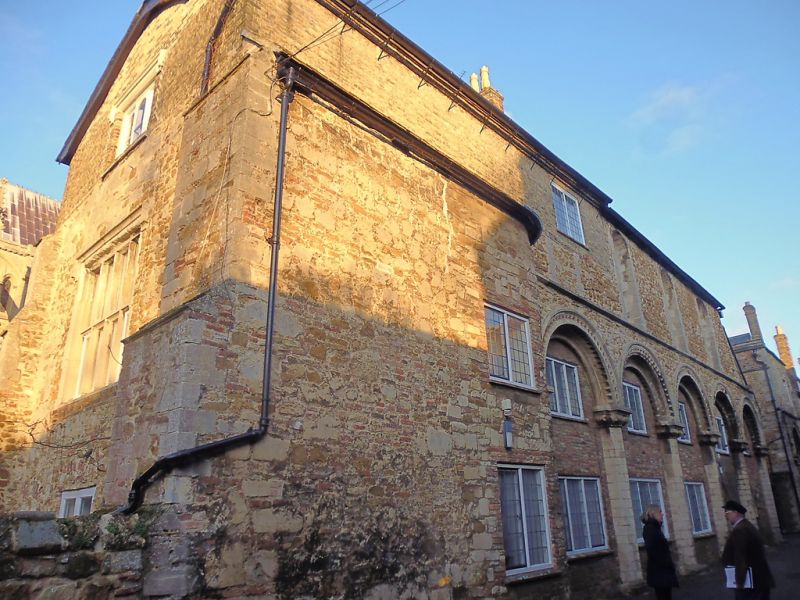 GV
The building at the north west end of Infirmary Lane was originally the Blood Letting House, built in the early C14 to accommodate the monks who underwent the Ely practice of blood letting once every six weeks. In 1416, it is recorded, Prior Powcher caused to be built, almost anew, the hall in the Infirmary for those who had been bled. A third storey, which is timber-framed, was added in the early C16. On the south side there are five bays of the C12 Infirmary arcading with alternate round and octagonal columns and richly ornamental arches and capitals and three tall round headed clerestorey windows above with nook shafts on what was originally the outside face. The nave arches are now blocked and have C20 windows. The north front is buttressed and the second storey has some timber-framing with brick nogging. The windows are much altered, some are double-hung sashes with glazing bars and some are mullioned and transomed casements. Roofs tiled, the eastern part is steeply pitched with a C16 roof structure. The interior has moulded beams.

The Dark Cloister, Powcher's Hall, the Painted Chamber (Walsingham House), the Chapel of the Infirmary (Deanery), the Black Hostelry and Cellarers Chamber, and Cellarers House (Boarding House of King's School) form a group. See also general group description under the Cathedral of The Holy Trinity.