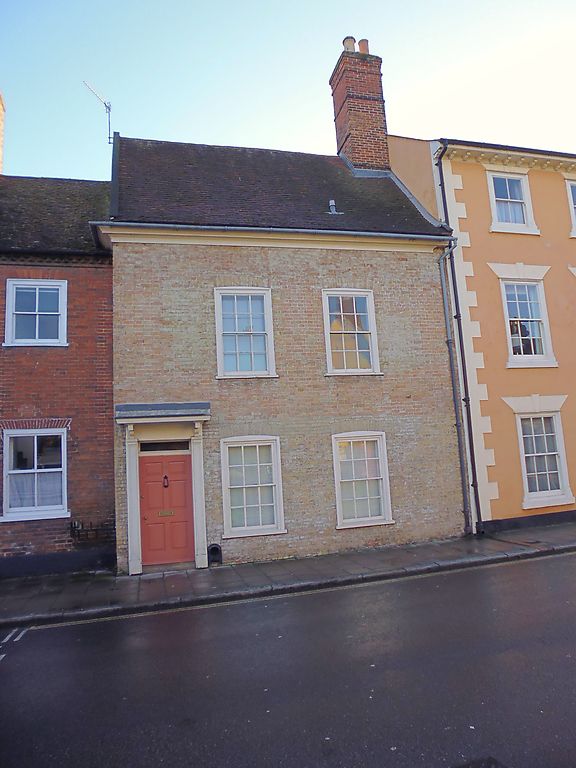 House. C16 and C17, altered in the early C19. Timber-framed;
fronted in white brick; plaintiled roof. A large plain end
chimney-stack on the west.
EXTERIOR: 2 storeys, attic and cellar, with a 2-storey rear
wing. 2 window range: 12-pane sashes in flush cased frames
with segmental arches to frames and surrounds. A 6-panel door
with a shallow fanlight has a doorcase with pilasters and a
flat cornice hood on moulded brackets. A recessed foot-scraper
in the wall by the entrance door.
INTERIOR: small brick-lined cellar. The front ground storey
room has square Jacobean panelling, discovered during
restoration in the 1970s, which covers one wall and forms a
dado to another. Fireplace with a reeded surround. Moulded
plaster cornice. Early C19 stair with stick balusters and
ramped and moulded handrail.
On the upper storey the back wall has good C16 studding with a
shallow cranked tension brace pegged to the studs and a middle
rail with assembly marks. The C17 timber-framed rear wing is
butted up against this wall: it has some original studding and
a rebuilt end wall in C20 brick. It was probably originally
open to the roof and the ceiling joists may be a C20
insertion. All the roof timbers are concealed. On the south
side the house overlaps with a small timber-framed wing
forming part of No.24 (qv).