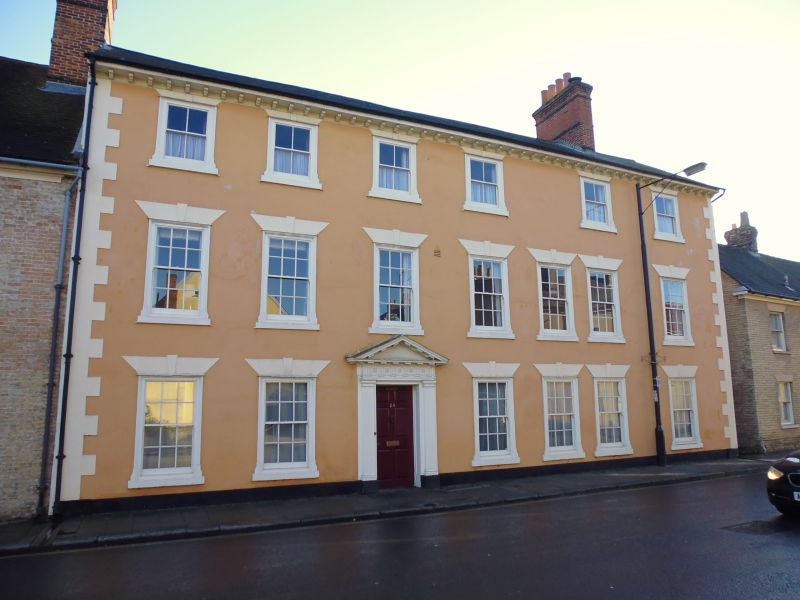 House; now St Nicholas Hospice. Late C17 and C18. Stuccoed
brick front with rusticated quoins; white brick to rear with
red brick dressings; slate to front slope of roof, plaintiles
to rear.
EXTERIOR: 3 storeys, attic and cellar. 7 window range: all
sashes, slightly irregularly spaced, without glazing bars, in
moulded and shouldered architraves with raised flat arches and
keystones. 6-panel entrance door with a Doric doorcase, fluted
pilasters, triglyph frieze and pediment. The rear is in white
brick with red brick dressings and has a heavy wood modillion
cornice.
A hipped wing projects on each side of the centre: on the west
with two 12-pane sashes in flush cased frames to the ground
and 1st storeys. A 2-light segmental-headed dormer; on the
east a similar window arrangement has been changed on the
ground storey by the addition of a flat-roofed early C19
extension with a tripartite sash window, 12-pane to the centre
light, 8-pane to the sides. The centre has 3 similar sashes at
different levels, one to light the stair.
At the north side, a small section of a lower timber framed
building is merged with the main range and may be a fragment
of the original house on the site.
INTERIOR: extensive cellars, mainly brick lined, but with a
section of stone blocks along the front wall. A main beam with
large chamfer and one old 2-light window with square leaded
panes and pintle hinges. Some original sash windows on the
ground storey of the rear wings have heavy ovolo-moulded
glazing bars; the floors have the remains of York paving
stones. 6-panel doors throughout.
The ground storey room to the left of the entry has
bolection-moulded panelling and door surrounds, beams with
panelled boxing and a moulded cornice with dentils. One door
has a panelled segmental-arched surround with keystone. To the
right of the entry the room is fully panelled with raised
fielded panelling; moulded dado rail; fireplace surround with
eared architrave.
A fine stair has moulded and ramped handrails, open bracketed
strings and paired turned balusters. A flight in similar style
leads from the 1st storey to the attic: some turned balusters

have been replaced by plain square ones. An upper room at the
east end has mock Jacobean panelling throughout.