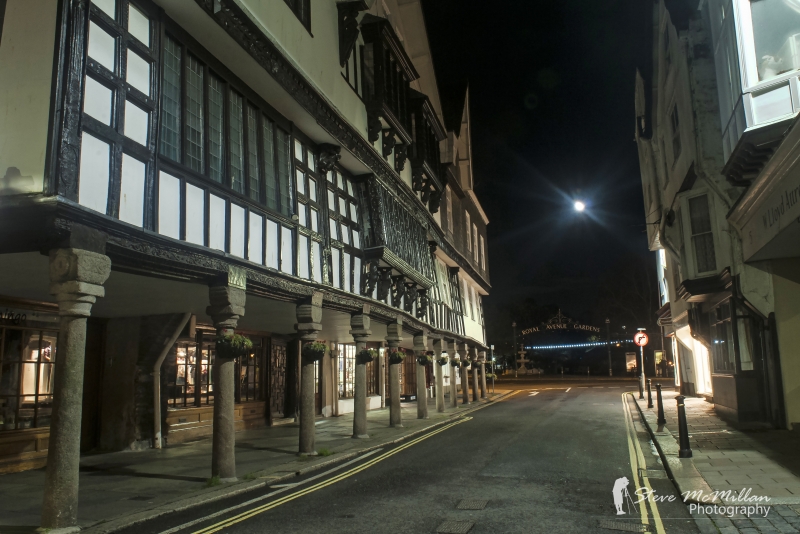 One of a row of merchants' houses, now a shop and museum with
accommodation above. The row is dated 1635 and 1640, various
minor later alterations and a major renovation programme in
the 1950s after severe bomb blast damage in 1943; David Nye
and Partners of Westminster, London (architect), PW Wilkins
and Sons Ltd. of Torquay (builders). Mixed construction; but
unlike the other Butterwalk houses this one is mostly
timber-framed but does have some stone rubble walling at
ground-floor level; front is an ornate display of
timber-framing with slate-hung upper floors, and the walk
carried on granite piers; no stacks; slate roof.
PLAN: This, the centre unit of the original row, is smaller
than its contemporary neighbours. Built end onto the street,
one room wide and one room deep with no stack. The first-floor
room is now part of Dartmouth Museum with No.6 (qv), but a
blocked doorway in the left wall suggests that the upper
floors were originally part of No.10 (qv). Early documents
mention a passage through the middle of the Butterwalk wide
enough for a carriage to a shared back yard with a crane,
brewhouse and other communal facilities (see sources).
EXTERIOR: 3 storeys and attic; one-window range. Ornate
jettied timber-framed front forming part of a unified front
comprising Nos 6-12 (even) (qv), the houses of the Dartmouth
Butterwalk. The first floor oversails the Butterwalk and is
supported on a carved bressummer on an arcade of granite piers
with moulded capitals under blocks carved with geometric and
heraldic motifs. Recessed shop front is mid C20. First floor
of exposed timber-framing. Centre rebuilt with tripartite sash
window, centre 12-pane sash. Largely original moulded
small-panel framing each side, the faces of the original
timbers carved with strapwork patterns and guilloche. End
posts (on party walls) are carved as pairs of Ionic pilasters
on pedestals under carved brackets supporting the second-floor
jetty which has carved fascia. Slate-hung above. Second floor
has a central 12-pane sash. Attic under gable is jettied, the
bressummer carved with a kind of egg-and-dart. Gable has a
horizontal-sliding 12-pane sash. Gabled rear elevation is a
plastered timber-frame and contains some original C17 oak
mullioned windows.
INTERIOR: Well-preserved but few original features are
exposed. There is a moulded timber frame to a blocked doorway
through to No.10 (qv) and, at ground-floor level, a moulded
axial beam. The stone crosswall at ground-floor level has no
recognisable function, possibly it was associated with
strengthening masonry put into the row in 1657 (see sources).
Other C17 features are probably hidden. Upper floors and roof
not inspected.
HISTORY: This house forms a part of the Dartmouth Butterwalk,
which is one of the finest rows of merchants' houses dating
from the first half of the C17 anywhere in England. The
Butterwalk was built on reclaimed land as part of the same
scheme which created the New Quay. The western half was leased
to William Gurney in 1628, the eastern half was leased to Mark
Hawkings. Both began to build, but in 1635 William Gurney sold
his part to Hawkings who completed the row by 1640 at a cost
of nearly »2500. The row originally continued one house
further east; the Butterwalk arcade was of 13 granite piers
and is now of 11. Backed onto river when originally built.
(Freeman, Ray: Dartmouth and its Neighbours: Phillimore:
1990-: P.80-83; Devon Buildings: Laithwaite, Michael: Town
Houses up to 1660: Devon Books: 1990-: P.113-5).