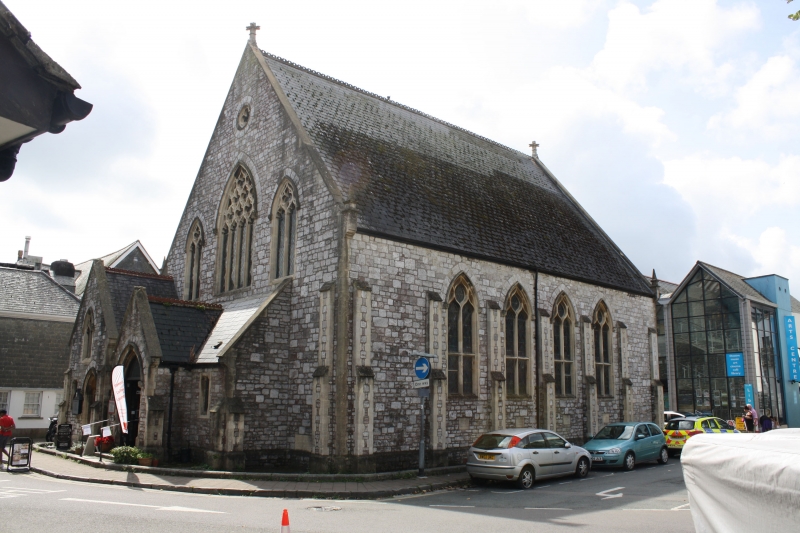 Non-conformist chapel, United Reformed, formerly
Congregational. Dated 1895. Snecked limestone with Bathstone
dressings; slate roof with pierced crested ridge tiles.
PLAN: Rectangular, with a vestigial east end at the actual
west end, and a double porch at the actual east end. Vestry on
the south side.
EXTERIOR: Decorated style. 2 gabled porches project from the
east end. The right one has a large outer arch, 2-centred with
moulded surround and hoodmould with carved leafy label stops,
to the main doorway which contains the original plank door
with good wrought-ironwork. Larger left porch has a smaller
doorway in the same style and a first-floor 2-light window
with Decorated tracery. Behind is the main east front with
large central 4-light window flanked by 2-light windows. Like
all the others they have 2-centred arch heads and hoodmoulds
with carved foliate label stops. Quatrefoil oculus under the
apex of the gable which, like the west end gable, has obelisk
finials over the shaped kneelers, stone coping and apex cross.
Side walls are 6 bays divided by buttresses and central 4 bays
contain 2-light windows.
INTERIOR: Not inspected. Known to contain an unusually-early
non-conformist memorial to John Flavel (died 1691), an
inscribed brass plaque praising his virtues. Originally
erected in the Church of St Saviour (qv) but removed to the
Foss Street chapel in 1709, and brought here in 1895.
HISTORY: Built at a cost of £1200 on reclaimed land close to
the site of the C18 chapel which was thereafter used as a
Sunday School (it was bombed in 1942). John Flavel was the
minister at the Church of St Saviour (qv) until 1662, after
which he led an eventful life as a dissenting minister;
travelling in disguise, evading the authorities, preaching in
secret and publishing 6 volumes of religious writing. His
followers (from most of the leading mercantile families of the
time) set up a dissenting meeting house in Foss Street in the
1670s. Several of these C17 dissenters are commemorated in a
series of stone tablets set in the chapel walls.
(Freeman, Ray: Dartmouth and its Neighbours: Phillimore:
1990-: P.112-3/P.165).