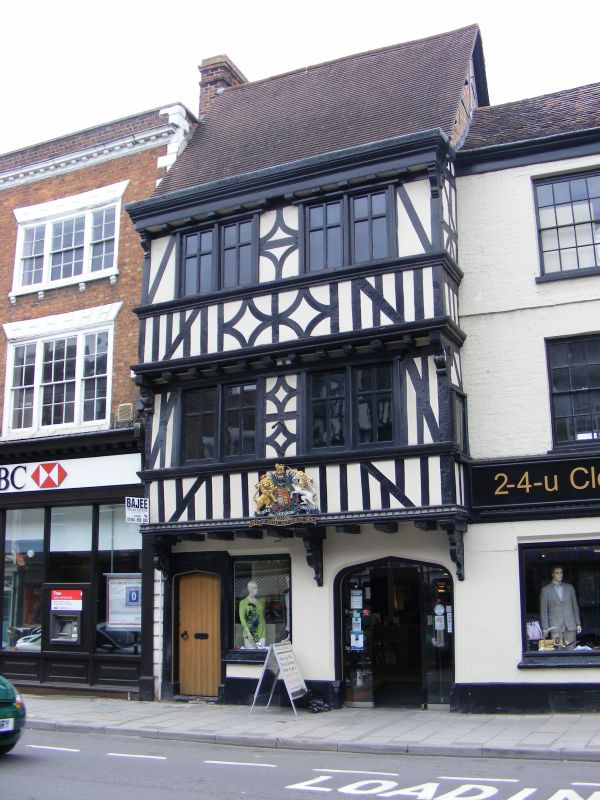 House in row, formerly the Old Fleece Inn. Early C17. Facade,
much restored in late C19, of close-stud timber-frame with
exposed bracing and lozenge panels, plaster infill, tile roof,
brick stacks.
PLAN: a double-jettied front, substantially restored, to a
very steep roof parallel with the street, and with deep rear
wings. Originally a side-entry plan, once common in
Tewkesbury. A long rear wing was added in the C17, with a very
steep pitched roof and timber framed gable; attached is a
lower gabled unit with horizontal boarding, and a further,
detached lower wing beyond this, in brick and tile, but with
half-timbered gable, and a loading opening.
EXTERIOR: 3 storeys, 2- windowed. At first and second floors
are 2-light paired casements with transom and central mullion,
on moulded cill bands, returned to the projecting sides; at
the first floor is a small light on each of these returns. The
ground floor, in rendered brick or stone, has a wide opening
to 4-centred head and chamfered surround, stopped to the
plinth, to the right.
The plate-glass shop front is set back from the arch, and to
the left is a moulded panelled door to a 4-centre head and a
shallow transom light, with a plain glass display window
attached. Jetties are carried on carved brackets, 3 at ground
floor and 2 at the upper levels, and with moulded bressumer
facings, that to ground floor with brattished top. Deep
modillion eaves to moulded cornice and gutter box. A painted
Royal Arms with supporters is set below the first floor
windows, centrally. Some framing is visible in the right
gable.
INTERIOR: ground floor has features concealed; upper floors
not accessible but noted as having retained original and C17
features including panelling.