A Grade I Listed Building in East Cowes, Isle of Wight 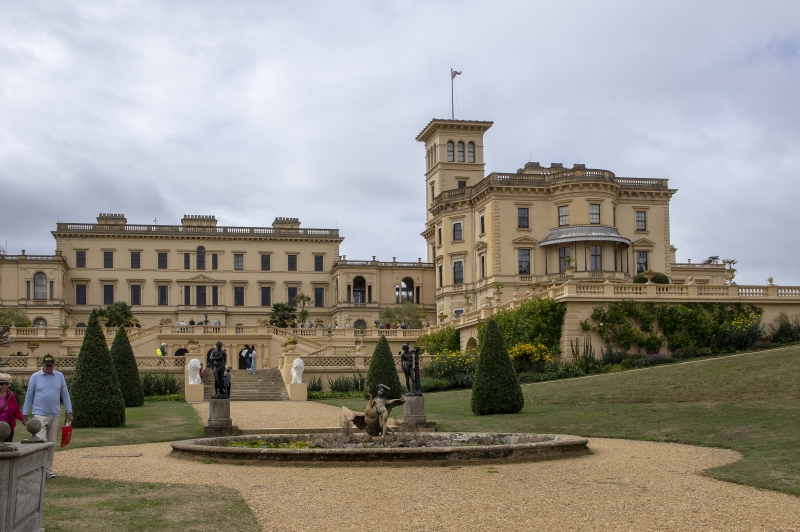 WHIPPINGHAM ROAD
1.
5270
East Cowes
Osborne House
SZ 59 SW 7/123
I GV
2.
The present house dates from 1845, and is built on the site of an C18 house
built by Robert Pope Blanchford and sold by Lady Isabella Blanchford to Queen
Victoria in 1845 who promptly had it demolished. The new house was designed
by Prince Albert but Thomas Cubitt was the builder and probably to some extent
the architect. Large irregular house in Italianate style built of brick cement
faced, strengthened with iron girders. The Pavilion Wing was completed in
1846 and the Household Wing in 1851. In the 1890s the Durbar Wing was added,
and this was built by Bhai Ram Singh and John Lockwood Kipling, Rudyard Kipling's
father. The architect was J R Mann. The entrance front is the south-west
side. The south-west wing here forms an L. Its south-west front has 3 storeys
and basement with balustraded area. Seven windows. Stringcourses, modillion
cornice and balustraded parapet. Windows in moulded architrave surrounds with
cornices and brackets over and glazing bars intact. At each end of the ground
floor is a bay of 3 windows with a balustraded parapet over surmounted by 2
statues. The north-west front of this L has 11 windows, round-headed windows
on the ground floor, flanked by rusticated pilasters. On the lst floor is
a loggia running the whole length of the front, having 11 round-headed openings
shaped like Venetian windows with Ionic columns, each opening flanked by Ionic
pilasters. Dentilled cornice and parapet over the loggia, surmounted by urns,
which forms a balcony. Modillion cornice above the 2nd floor and parapet over.
This wing of the south-east courtyard is joined to the centre block of the
north-west courtyard by one window bay of 2 storeys similar to the north-west
face of the loggia wing. Then comes the Flag Tower, 107 feet high of 5 storeys
with bracket cornices above the third floor and at the top. Round-headed window
on the ground floor and 3-light windows on the top floor. The remainder of
this centre block has 4 windows. The windows have moulded architrave surrounds
with pediments over and glazing bars intact. This centre is joined to the
north-west wing of the courtyard by a portion of 2 storeys and 2 windows with
loggia as on the south-east. The north-west wing is known as the Durbar wing
and was added after 1897 to contain all the Indian gifts made to the Queen
at her Diamond Jubilee. The wing has 2 storeys and 4 windows. The south-westernmost
window bay is recessed. The reminder are flanked by Ionic pilasters with a
cornice above the ground floor and a cornice and parapet above the 1st floor.
Windows similar to the other wings but these on the ground floor flanked by
engaged Corinthian columns. On the garden front the centre block of the north-west
courtyard has 3 storeys and 5 windows with a curved bay of 3 windows in the
centre. This has a stuccoed balcony with hood on the 1st floor. Behind this
Was Queen Victoria's bedroom which was the room in Which she died on 22 January
l901. The garden front of the north-east wing of the other courtyard has 3
storeys and 9 windows with a Venetian window in the centre. It ends in a portion
of lower elevation containing 2 storeys and 3 windows, like the loggia portion
on the north-west front, and another tower of 5 storeys with a 2 light window
on each floor and a bracket eaves cornice at the top. In front of this wing
is a terraced Italian garden. To the south-east are extensive service wings.
The interior contains a well staircase with iron balustrade and a fresco of
Neptune entrusting the Command of the Sea to Britannia, executed by Dyce in
1847. The State rooms on the ground floor have Georgian style motifs. The
Durbar wing has walls covered with Indian plaster decoration and peacock overmantel
to the fireplace. Osborne House is listed for its architectural interest
and historical interest as the home of the Victorian Royal Family and the death
place of both Prince Albert and Queen Victoria. The house is now partly a
museum and partly a convalescent home for civil servants.