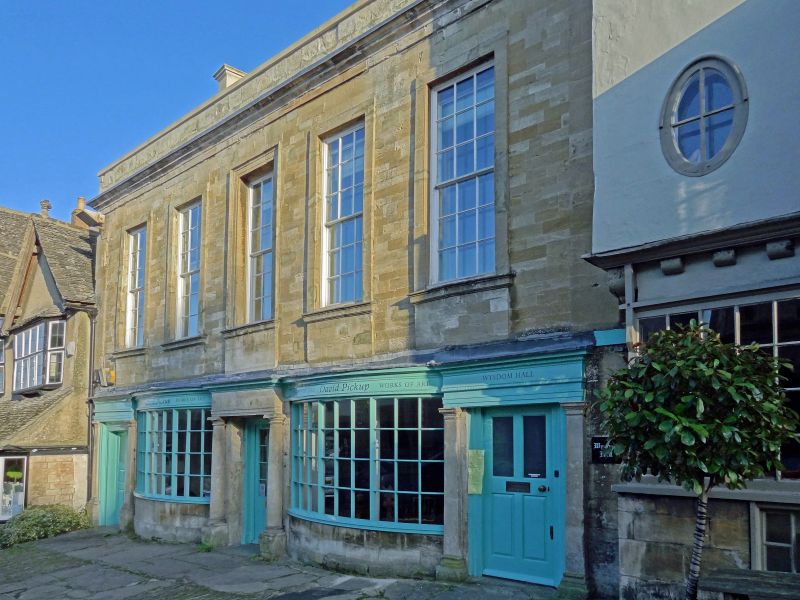 BURFORD AND UPTON HIGH STREET
AND SIGNET (East Side)
SP2512 (Enlargement) No 115 (Previously
7/85 listed as "House and
12.9.55 Antique shop including old
wool adjoining The High Way
Hotel to the North)

House with shop premises. C16 with successive additions and early C18
front. Coursed and squared rubble with ashlar dressings and parapet,
Cotswold stone roof. Courtyard plan. 2 storeys; front with moulded
cornice and parapet over, attic in part of roof. 5 windows, outer in
raised flat surrounds, central one in architrave, all with bull-nose cills
and aprons below. Ground floor has alternating doorpieces and segmental
bowed shop fronts with virtually continuous frieze; central Doric portico
with 3/4 columns and flanking (perhaps C19) Tuscan porticoes, half glazed
doors, outer with raised and fielded lower panels. The East cross-wing is
in coursed and dressed rubble roofed in 2 hipped ends with low link, 16-
pane sashes in raised flat surrounds with keys, on ground floor thick
glazing bars with corner blocks - the early C18 date claimed for this wing
is possibly justified said to have been built for Richard Whitehall
(mercer); elliptical head entries to front and rear and flagged alley.
Rear wings have continuous 1st floor jetties; South-West corner of
courtyard has square stair turret with tall Segment headed keyed window;
Tudor arch doorway to South wing with stilted label. Interior: the most
important feature is the panelling on the ground floor of the North wing
dated 1555 with the mark of Simon Wysdom. Most of the timber is said to
be chestnut. The South wall of the South wing has a 10-light mullion
window with leaded lights (blocked). The stairs are cramped dog-leg with
turned balusters and high ramped hand-rails, in part with moulded newel
ends, splat balusters to cellar. Numerous features of various periods.
The main 1st floor front room is panelled and above is a plaster panel
dated 1722 with initials "R.S." In the South wing is a cross-beamed 1st
floor ceiling with ridged chamfer-shops, above the roof has wind-braces
and a square ridge. Moulded beams, C17 and C18 panelling abounds. In C16
the house of the local notable Simon Wysdom.