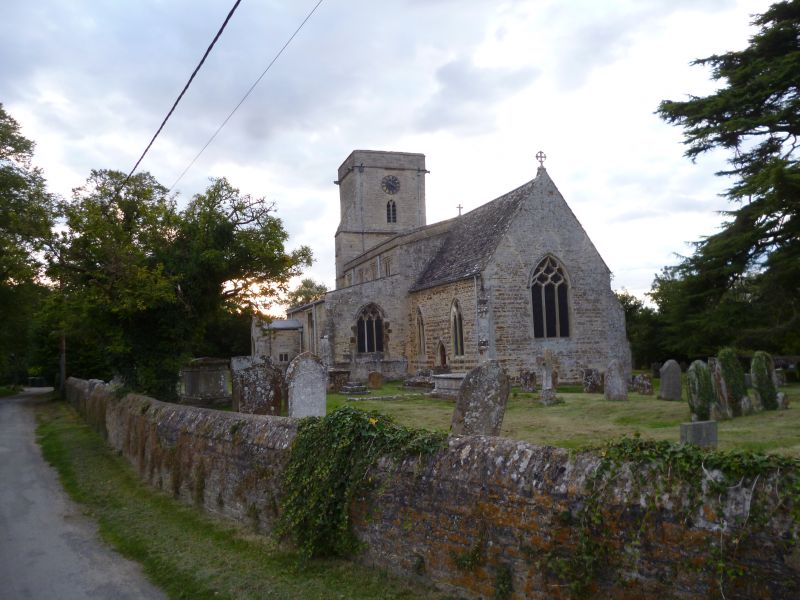 Church. C13, C14 and C15, restored 1848 by H.J. Underwood, and 1867 by C.
Buckeridge. Partly-coursed limestone and marl stone rubble with limestone-ashlar
dressings; lead and Stonesfield-slate roofs. Chancel, nave, north and south
aisles, west tower and south porch. Stone-slate-roofed chancel, in marlstone
with some limestone banding, retains a single C13 lancet to north, but the
3-light east window and the other side windows, all of lights, are C14 with
flowing and reticulated tracery; restored priest's door to south. The nave and
aisles are of limestone with shallow-pitched roofs: the south aisle with
Decorated windows of 3 and 2 lights to east and west, plus a large square-headed
3-light C15 window to south; the north aisle with a similar C15 window to north,
plus a 3-light window with intersecting tracery to east, and a small
square-headed C15 window to west. North and south doors are both C14, the latter
sheltered by a C15 porch with a moulded outer arch and tiny 2-light side
windows. The C15 nave clerestory has square-headed 2-light windows below an
ashlar parapet. The plain-parapetted C15 tower, in squared limestone with ashlar
diagonal buttresses and moulded plinth, has an arched west doorway within a
rectangular casement moulding, and has a 3-light west window with Perpendicular
tracery; arched 2-light bell-chamber openings above a moulded string; stair
projection at the south-east corner. Interior: Chancel has a C13 trefoil-headed
piscina with a restored projecting bowl, and has a C19 braced collar-truss roof.
C13/C14 chancel arch of 2 chamfered orders dying into responds; tall
continuously-moulded C14 tower arch of 2 chamfered orders. 2-bay C14 nave
arcades of 2 chamfered orders on octagonal columns, the south arcade probably
later with richer mouldings to the capitals. Both arcades have image niches in
the eastern responds, and both have masonry sections to east and west, the south
arcade with traces of an earlier arcade to west, and to east a C15 rood stair
projecting into the south aisle with a further niche. South aisle has similar
niches with traceried heads flanking east window, a small restored C14 piscina,
and an ogee-headed holy-water stoup. North aisle has a C14 column piscina with a
stone shelf. C19 nave roof has traceried infill and curved braces to the shallow
trusses; C19 aisle roofs have, moulded principal members. Fittings include a
restored C15 screen with traceried panels, and a medieval chest. C19 corona
lucis above the octagonal C14 font. Fragments of medieval stained glass in south
aisle west window; glass of 1916 in south aisle east window; C19 glass in
chancel. Monument to Gabriel and Alice Myrry (died 1684 and 1681) has a
rectangular panel flanked by inverted cornucopiae, below a cartouche of arms.
(VCH: Oxfordshire, Vol VI, p183; Buildings of England: Oxfordshire, pp692-3)