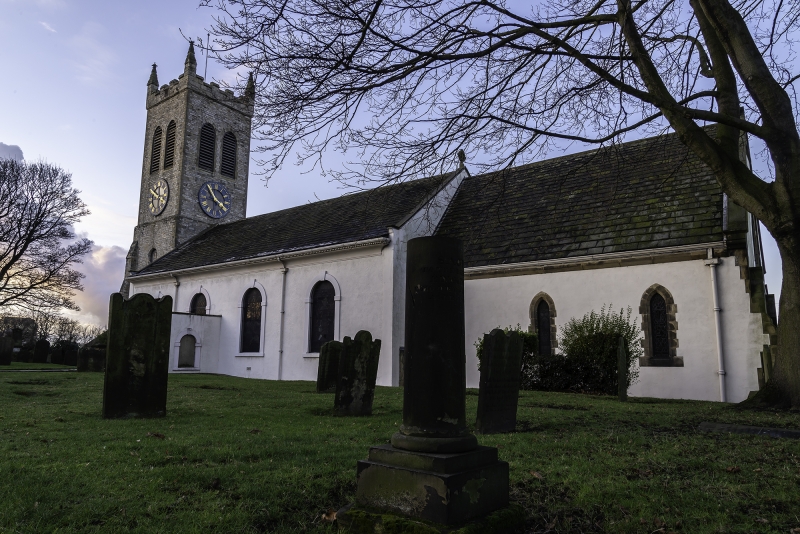 KNOTTINGLEY CHAPEL STREET
SE42SE
(west side)
5/33 Church of St. Botolph
18.12.1963
GV II
Parish church. 1750 rebuild of Norman chapel, with west tower added 1873,
chancel rebuilt 1886. Magnesian limestone (nave and chancel both rendered),
stone slate roofs. West tower, nave with south porch, chancel. Rectangular
4-bay nave in simple classical style has round-headed windows with imposts
and keystones, and 2nd bay has a square flat-roofed porch beneath the window,
with similar round-headed outer doorway and side-wall windows. Four-stage
tower with angle-buttresses to 1/2-height and set-back upper stages has in each
side a single lancet to the 1st stage, a circular window to the 2nd, a large
clock face to the 3rd, a pair of louvred lancets to the belfry stage, and an
embattled parapet with corner pinnacles. Three-bay chancel has lancets, and
a 2-centred arched east window of 3 lights with bar tracery and a wheel in
the head.
Interior: C18 nave is a single vessel with wide round-headed chancel arch
(and was formerly galleried at the west end and north sides); west wall
incorporates the deeply-splayed reveal of a blocked round-headed Norman
window surviving from the narrower former chapel (see History). Numerous
wall monuments including: in north wall of chancel, a sandstone tablet to
William Savile of Criddleing Park (d.1691) with pedimented aedicule, a carved,
bird in the pediment, incised skull-and-crossbones in each corner, and full
inscription (in Latin); in south wall of chancel, 2 marble tablets with
pedimented aedicules (i) to Arthur Ingram (d.1733) with painted inscription
(ii) to Revd. Mr. Goodricke Ingram, Fellow of Trinity College Cambridge,
(d.1755), with broken pediment, each pediment surmounted by a coat of arms;
in round-headed panels between windows in south wall, 2 obelisk wall
monuments (i) to Lydia, wife of John Banks (d.1792), with bas-relief urn on
the obelisk, and (ii) to Ann, daughter of John Banks and Lydia his wife
(d.1781), with bas relief of child weeping over urn.
History: built by Henry de Lacy, lord of the manor, c.1150, as chapel of ease
to All Saints, Pontefract; rebuilt in C18, with endowments of Ingram family
of Temple Newsam (then lords of the manor of Knottingley); galleries and box
pews removed in 1887.