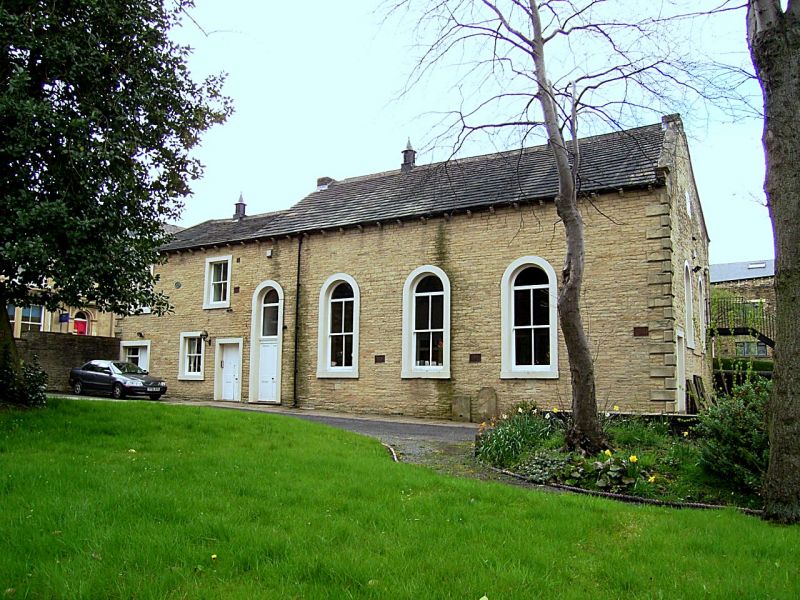 A Quaker meeting house of 1743 with C19 boundary walls.

Exterior: A two-storey, two bay range sits to the west with a taller, double-height hall to the east. Both are under gabled stone slate roofs with coped gable ends and kneelers to the east and west. There are ventilation turrets to each section, while the hall incorporates truncated stone gable stacks to either end. There are rusticated ashlar quoins to the south-east and south-west, with flush inserted quoins to the north-west.

The south elevation incorporates scattered windows and two doors with flat-headed openings to the west section. The hall has four tall round-headed windows and one entrance to the left. All openings sit within painted stone squared surrounds. The windows are two-over-two pane horned sashes while the two double doors to the right are panelled. The entrance to the left has been renewed with a modern door and window.

The north elevation has two two-over-two horned sashes within surrounds, as well as a window with no architrave to the ground floor. All sit within the western section; the hall section is blind. There is evidence of former quoins tying the two sections together at the point where the building formerly extended further north.

Interior: The hall ceiling has panelled beams with stepped cornices separating the bays. There is a ceiling rose to each bay. The hall space has been divided in two so that most of the southern half is open to the ceiling, while the northern half has an inserted floor and numerous partitions to the ground floor. The upper sections of the infill are glass so that the fabric of the ceiling has not been disturbed or the views interrupted. Security grates have been attached to the windows.

The western section has been entirely modernised with numerous partitions inserted to both floors. A straight flight modern stair sits to the south. The first floor has retained decorative cornicing which runs the perimeter of the entire floor, suggesting it was once open plan.

There is access between the two first floor areas via a modern door, however there is also a blocked double door to the north. It is therefore possible there was once a gallery of some sort to the hall.

Subsidiary items: A boundary wall runs from the north-east corner of the hall, along the north, east, south and west perimeters of the plot. This has round-headed capstones to the north perimeter and northernmost half of the east perimeter. The capstones to the southern half of the plot are triangular, while those to the west are flat. There is a later building in separate ownership which incorporates a section of the wall to the east; this has led to the removal of cap stones and the addition of later stone walling above perimeter wall height. This building is not included within the list entry. A section of wall with later flat capstones projects west from the eastern perimeter; this terminates at roughly the easternmost extent of the hall. There are two piers with flat cap stones to the west; the gate is renewed. Grave stones (which are included in the listing) dating from 1821-1893 are lined up along the northern perimeter, with some to the north section of the hall’s gable end.

This Quaker meeting house is thought to have been purpose built in 1743, although the hall may have been adapted from an existing dwelling. The 1st edition 1:10560 Yorkshire OS map of 1854 shows the building as L-shaped in plan, with the west section projecting further to the north. It is labelled as a Friends Meeting House by this time, although the plot is narrower and the burial ground is not separated. By 1894 the extent of the grounds and the footprint is depicted as similar to that which exists today, although a small projection, possibly a porch, sat in the position of the current disabled access ramp. The meeting house will have undergone some renovation between 1854 and 1894, including the reroofing of the range after truncation, the redesign of some windows and the addition of kneelers. There was an L-shaped range of glasshouses abutting the west boundary wall and the west side of the south elevation at this time; this was demolished after 1933. There was also a section of wall connecting the south-east corner of the hall with the projecting wall which remains in-situ. This separated the burial ground to the east of the hall from the remainder of the plot; it was also removed after 1933.

The building was converted for nursery use in 1992. This necessitated the insertion of new partitions throughout, including a new floor to half the width of the hall space. The upper floor of the hall is still in use for Quaker meetings, while the ground floor of the hall and both floors of the west range are let for use by charity organisations.

The Friends Meeting House and attached boundary wall are designated at Grade II for the following principal reasons:
* Historic interest: as an early example of a purpose built Meeting House;
* Architectural interest: the shift from a modest, vernacular design to a Classical upgrading demonstrates the growth in the denomination in Halifax during the C19;
* Subsidiary items: the walls demonstrate the expansion of grounds during the mid-late C19, partially due to increased stability following the 1844 Dissenters Chapels Act.