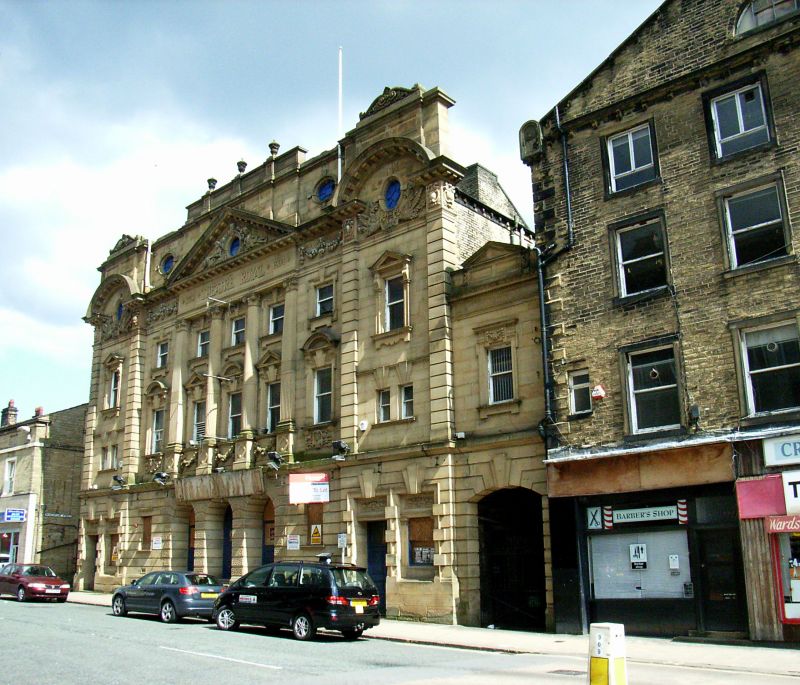 WARD'S END
SE 0924 NW
679- /18/10068 Theme Royd, former Royal
Cinema
II
Theatre, used as a bingo hall. 1904, converted c1930. Designed by Richard Horsfall.
Ashlar with ashlar dressings. Baroque Revival style. West front, 7 windows. Rusticated
ground floor, with 3 central round headed entrances with vermiculated rustication,
flanked by single boarded windows, with beyond on each side a recessed door and a
window to the right. Above the 3 window centre has an applied giant Ionic portico with
a circular window in the pediment with flanking reclining figures. 5 windows with
moulded surrounds and prominent keystones with alternating segmental and triangular
pediments. Above 5 smaller windows with moulded surrounds and aprons. Above again
the outer bays are topped with oval windows. Slightly projecting outer pavilions each
have 2 small sashes on the first floor, with above a single sash in a moulded and
pedimented surround. Above again an oval window with carved surround in an open
segmental pediment. To the right a single bay over a segmental cart entrance with a single
sash above in a moulded surround- Interior: was remodelled c1930, when the building
was converted to a cinema, with standard Art Deco style decoration.