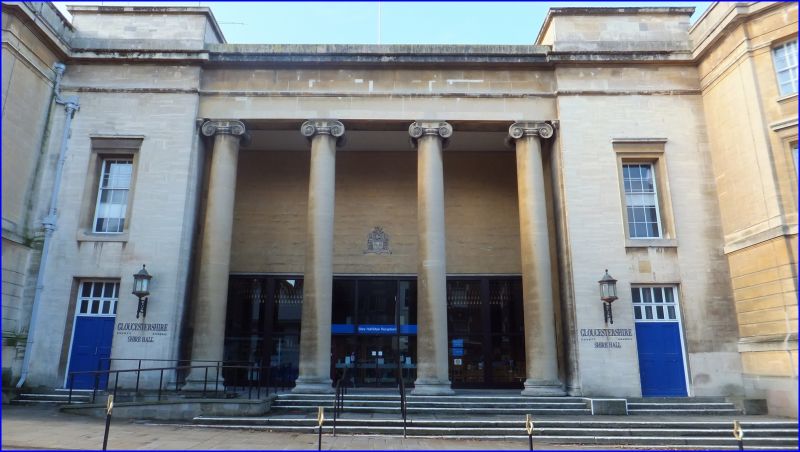 Shire hall portico and flanking wings. The original building,
of which the portico remains, opened 1816. By Sir Robert
Smirke for the County Magistrates. Substantial extensions to
either side of entrance front, 1909-11, by MH Medland for
Gloucestershire County Council. The entrance portico and the
flanking wings retained when building was otherwise demolished
and rebuilt with major additions, 1960-1970. Ashlar, composite
roof. The original symmetrical facade, comprising portico
between slightly projecting wings, is set back from street
between later, flanking wings; the wider flanking wing on the
east side returns along the west side of Berkeley Street.
EXTERIOR: giant Ionic portico of three bays flanked by
two-storey, single-bay wings is approached by two shallow
flights of stone steps in forecourt flanked by later wings,
above the portico the crowning entablature is slightly
recessed between parapets with moulded copings above the
single bay wings; on the front of each wing a central doorway
and on the first floor a sash. The later projecting wings, of
three storeys and basement, have canted angles at the outer
corners on the sides towards the forecourt, plain ashlar
plinths at basement level, raised bands at ground-floor sill
level with banded rustication above capped by raised bands at
first-floor sill level; the first and second floors faced with
plain ashlar, crowning entablatures with parapets with open
balustrade panels; all the sashes with glazing bars; a bronze
sconce on each side of the portico.
INTERIOR: mostly rebuilt 1960 to 1970.
The Assize Courts at rear, formerly listed as part of Shire
Hall, now listed as Crown Courts, Bearland (qv).
(BOE: Verey D: Gloucestershire: The Vale and the Forest of
Dean: London: 1976-: 239; VCH: The City of Gloucester: Oxford:
1988-: 249).