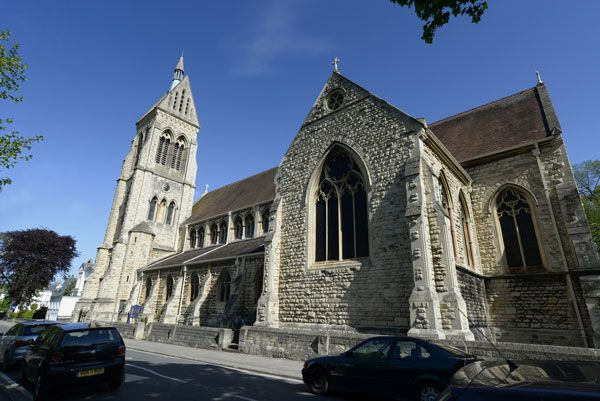 An Anglican parish church with attached walls and gates, built between 1879-82, designed by John Middleton and built in the Gothic-Revival and Decorated-style, with a tower added in 1903 to designs by Prothero and Phillott.

An Anglican parish church with attached walls and gates, built between 1879 and 1882, designed by John Middleton and built in the Gothic-Revival and Decorated-style, with a tower added in 1903 to designs by Prothero and Phillott.
MATERIALS: rusticated, coursed limestone rubble with ashlar and red sandstone dressings, a plain tile roof and a copper-covered tower roof; the boundary walls are built in coursed limestone rubble with wrought-iron gates.
PLAN: six-bay aisled nave with clerestory and a tower in the south-west corner; the chancel to the east has three bays with a south chapel and the vestry to the north.
EXTERIOR: the west end has three bays. In the middle is a central gable-end bay which contains a pair of plank doors with ornate hinges within a pointed arch surround of three orders supported by red sandstone columns, all under a hoodmould. Above is a pair of triple light windows in a Decorated-style, which flanks a statue niche and is set under a small rose window. To the left is an offset buttress and the end of the north aisle which has a pointed-arch window. To the right is the square tower of 1903 with three lancet windows to the first stage, an arcade of three large pointed-arched windows (the central one of which is blind) supported by colonnettes to the second stage and to the third stage, a pair of pointed-arched belfry windows with three orders of arches on red sandstone columns; a similar arrangement is found on the east elevation of the tower. The tower entrance is on the south side. In the middle of the south elevation is a statue niche with a decorative canopy and belfry windows above. A stair turret is attached to the south-east corner. The tower has a saddleback roof surmounted by a flèche. The aisle bays on the north and south elevations are divided by offset buttresses. Within each bay is a pointed two light window, with the exception of the north-west bay, which has a three-light window and a small, pointed, cusped-arched plank door in the south-east bay. The clerestory contains pairs of two-light windows. The south chapel (south transept), has a four-light window. The vestry (north transept), has a pair of two light windows under a small rose window. The east elevation includes the five-light chancel window. To the left is a pair of two-light pointed-arch windows (the south chapel), and to the right (the vestry), is a plank door with a cusped arch above and a wrought-iron light fitting, and a single and a two-light pointed arch window.
INTERIOR: the interior is decorated with polychromatic stonework. The nave arcades have banded clustered columns with roll moulded capitals and pointed arches with four orders of roll-moulding, all topped by a continuous hoodmould. There is continuous cill band beneath the clerestory and corbelled columns support the gilded principal trusses, which form part of the barrel-vaulted ceiling. Some of the pews in the south and north aisles have been moved or re-oriented to provide space for an enclosed kitchen area in the west end of the south aisle and a carpeted crèche space in the east end of the north aisle. The pointed chancel arch stands on black-marble columns, and consists of two orders of arches with decorative carving topped by an ornate carved hoodmould. The chancel floor is covered in Minton tiles. The chancel roof has a vaulted ceiling and is supported by carved corbels. The chancel window has a blue and white banded pointed arch supported by slender black marble columns. Within the left chancel wall is the piscina topped by a pointed arch with tracery detailing, and the attached sedilia with a row of three cusped trefoil arches, all supported by black marble columns. The walls are decorated with polychromatic painted bands. There are two sets of double arches in the north and south side of the chancel each containing two orders of arches with carved decoration supported by red-stone column clusters. The north arches incorporate the church organ and beyond this is the vestry, including a C20 timber staircase and mezzanine floor. Beyond the south arcade is a chapel. The church crypt, accessed externally via a door in the west end of the church, includes a columbarium which provides storage for funerary urns.
There are some notable fixtures and fittings within the church. These include the stained glass window, most of which are by Heaton, Butler and Bayne (1882-1900). The west window of the south chapel is by Michael O’Connor (1864) and was the east window to the earlier church. The north and south chancel windows are by C E Kempe (1881). The north aisles windows include work by Hardman (circa1881), Christopher Webb (1927) and Richard Webb (1991). The Middleton Memorial window in the north aisles is by John Henry Middleton, the son of the architect (1888). The oak pews were made by Middleton’s practice and the elaborate carvings executed by C F Yean and H H Martyn & Co. The five-light chandeliers suspended from the ceilings are likely to have been part of the original design. The carved stone reredos at the end of the north aisle is from the Church of St James, Suffolk Square. The stone pulpit, added in 1885, is intricately carved with foliate decorative figures depicting saints within the niches and tracery detailing. The nave and chancel are separated by an ornate wrought iron screen, designed by Prothero (1902), with foliate and tracery decoration, with gilded detailing on a carved red marble plinth and topped by a wrought iron Rood cross. The canopied stone chancel reredos at the east end of the chancel was designed by Prothero and carved by H H Martyn (1889). The South Chapel contains a wooden war memorial reredos crafted by L W Barnard with a painted panel by J Eadie Reid (1923). Most of the monuments in the church date to the 1840s and are from the earlier church; several of are by George Lewis of Cheltenham.

SUBSIDIARY FEATURES: the boundary wall has a chamfered plinth and copings. It runs for approximately 26m along Grafton Road and 10m along Gratton Road and includes three pedestrian entrances. The tower porch entrance includes a set wrought-iron double gates with bars and dog bars and central scroll decoration, and ornate hinge posts surmounted by scroll decoration.

The Church of St Philip and St James was designed by John Middleton and built between 1879-82. It replaced an earlier church, designed in 1840 by Baker and Shellard which was built as a daughter church to the nearby St Peter’s. In 1869 it was granted separate parish status. In 1879 the Baker and Shellard church was demolished as it no longer met the needs of the expanding parish. It was replaced by the current building which extended across the former graveyard, provided seating for 800 and was consecrated in 1882. Middleton had intended to add a tower to west end and the original plans show a tower with three stages topped by a tall spire; however he was unable to carry out this plan due to inadequacies with the foundations. In 1903 a saddleback-roof tower was added by Prothero and Phillott in the same position as intended by Middleton. The church crypt, accessed externally via a door in the west end of the church, includes a columbarium, added in 1963 to store cremation urns due to the lack of space within the grounds of the church and which was the first of its kind in the country. In 2011 the south chapel was reordered in memory of Canon Peter Chicken.

John Middleton (1820-1885), started out as a pupil of James Pritchett in York and set up his own practice in Darlington in the 1840s. In later life he moved to Cheltenham where he designed several churches within the town. He also worked throughout Gloucestershire, in neighbouring counties and parts of Wales, working on a variety of architectural projects. Middleton’s ecclesiastical work includes St Mary’s Cheltenham (Grade II*), St Peter’s, Cheltenham (Grade II*), and his most notable church design, All Saints, Cheltenham (Grade I). After his death his practice continued under various names including Prothero & Phillot (1885-1908); Phillot & Barnard (1908-1912) and L W Barnard & Partners (1919-1950s). Other notable craftsmen involved in the construction and decoration of the church included H H Martyn, who carved the stone reredos and whose firm of internationally renowned craftspeople were also responsible for the detailing on the oak pews.

The Church of St Philip and St James with attached boundary walls and gates, Leckhampton, Cheltenham, is listed at Grade II* for the following principal reason:
* Architectural interest: it is a particularly well-detailed and well-executed example of Gothic-Revival architecture in a Decorated-style with good detailing and use of materials;
* Architects: John Middleton (1820-1885) is a nationally important architect, well-known for his impressive ecclesiastical work;
* Historic interest: its crypt includes the first columbarium in the country, added in 1963;
* Interior: it is notable for its particularly impressive interior, utilising polychromatic stonework combined with an elaborate gilded wooden vaulted ceiling;
* Decorative embellishments: it includes a very good compliment of high-quality original fixtures and fittings, including work by Prothero (Middleton’s partner) and by H H Martyn & Co.
* Group value: it forms an important group with the nearby listed buildings, including the adjacent Church House (Grade II), a former mid-C19 villa later used as church rooms.