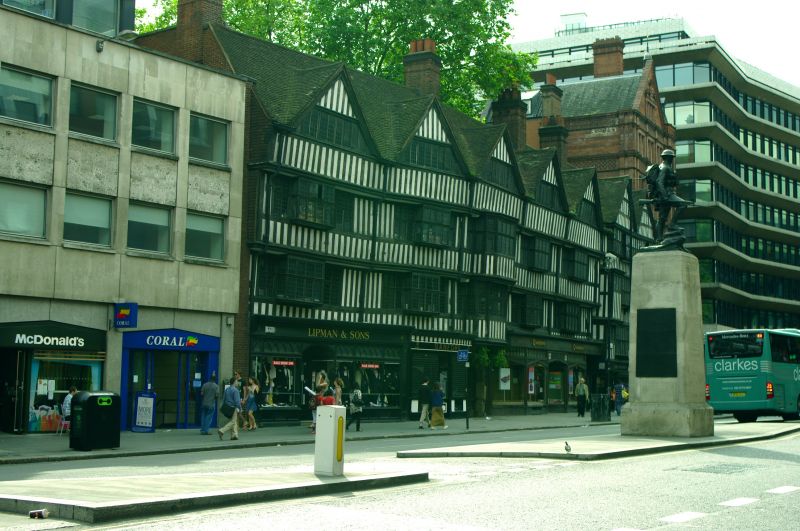 GV
II*
Two chambers and later shop. The rear of these buildings forms No.4 Staple Inn (qv). c1586 for Vincent Engham, Principal of the Inn. In 1886 Alfred Waterhouse removed post-medieval additions (plaster, brick facings and sash windows, inter alia), in a restoration funded by the Prudential Assurance Company. The structure was largely rebuilt in facsimile by Sir Edward Maufe in 1954-5.

Timber frame front elevation (close studded) with brick rear under a tiled, gabled, roof. C20 chimney stacks. four storeys and attic. To ground floor, early C19 shop fronts with entablatures, No. 338 projecting and flanked by brackets. Symmetrical front of two gabled bays, jettied at floors with projecting oriels of three lights at second floor level. Transom and mullion casement windows with square leaded panes. On the first, second and third floor projecting ranges of ten lights, flanked by two recessed lights and, on the first floor a projecting bay of three lights to the left and four recessed lights to the right, on the third floor projecting ranges of four lights. Bargeboards to gables.

HISTORY: until 1886 the original casement windows survived on the first floor of No. 337. These provided the example from which the remainder of the windows were designed.

With Nos 1-4 Holborn Bars (qv), these buildings form a unique example in London of a C16 group of timber-framed houses.

Formerly Listed in the LB of Camden. Since 1 April 1994 Staple Inn has been part of the City of London.