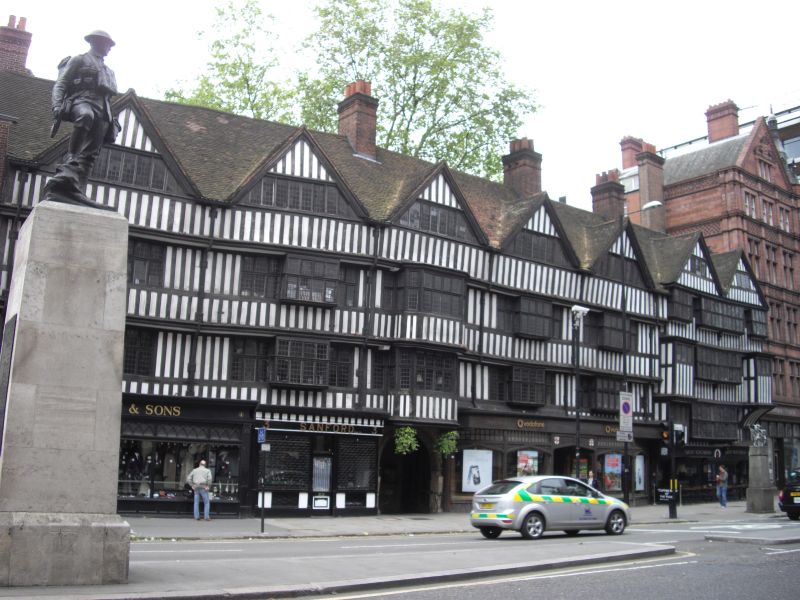 GV
I
Four chambers with later shops. The rear of these buildings form Nos 4, 5 and 6 Staple Inn (qv). 1586 for Vincent Engham, Principal of the Inn. In 1886 Alfred Waterhouse removed post-medieval additions (a plastered front and sash windows of C18 date) in a restoration funded by the Prudential Assurance Company. The rear resurfaced in brick c1826. Interior and rear extensively reconstructed in 1939 in order to preserve the timber framing to the front wall; restorations c1950.

At ground floor, entrance to Staple Inn, a carved stone arched gateway flanked by Jacobean pilasters with moulded impost-capitals, round arch with reeded archivolt, panelled soffit and pendant key-block. Double panelled doors with wicket in right-hand leaf. To left, early C19 shopfronts, much altered. No. 3 with projecting entablature; No. 4 entablature with inswept frieze and dentil cornice and Corinthian pilaster at right hand from former shop doorway. Interior with C19 mahogany and glass fittings.

HISTORY: with Nos. 337 and 338 High Holborn (qv), these building form a unique example in London of a C16 group of timber-framed houses.

Formerly Listed in the LB of Camden. Since 1 April 1994 Staple Inn has been within the City of London.