Remains of the Old Church of St Chad 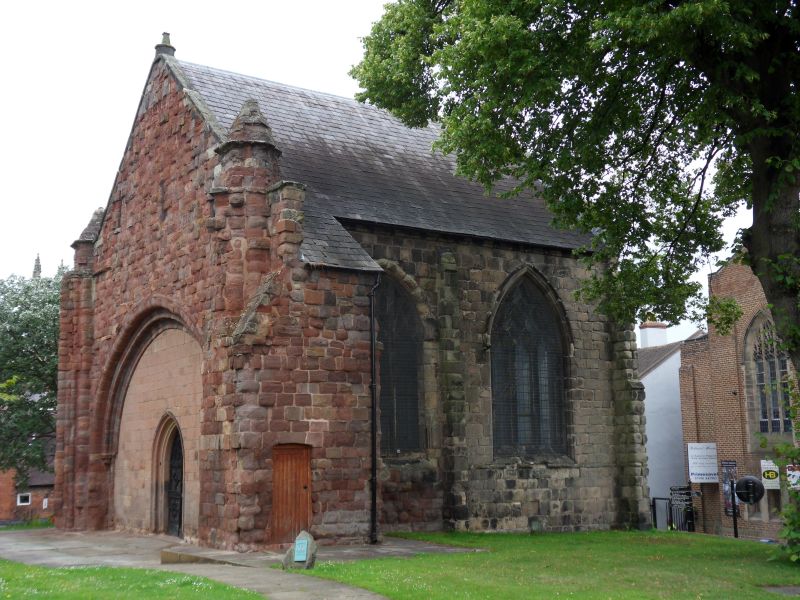 Entry Name: Remains of the Old Church of St Chad

Remains of the Old Church of St Chad which comprise the chancel's south wall and the south transept's east wall, both C12, and the late-C15 Lady Chapel, the latter being altered in the C16 and C17. The church was largely demolished in 1788.

Remains of the Old Church of St Chad which comprise the chancel's south wall and the south transept's east wall, both C12, and the late-C15 Lady Chapel, the latter being altered in the C16 and C17. The church was largely demolished in 1788.

MATERIALS: the north and west walls are of coursed and squared red sandstone, whilst the south and east walls are constructed from Grinshill stone. The roof is of Welsh slate.

PLAN: it is roughly square in plan.

EXTERIOR: the former Lady Chapel stood on the south side of the church, set within the angle between the chancel and south transept. As such, the chapel’s north and west walls respectively represent the chancel’s south wall and the south transept’s east wall, both C12 with later alterations.

The west wall contains a wide, low arch, formerly open from the south transept to the Lady Chapel, which was blocked with masonry c1788. It has two keeled mouldings on imposts, the left-hand side retaining a capital with upright leaves. Set within the arch is the former west door from the demolished nave which now forms the present entrance. It has a moulded, pointed arch and double doors with deep moulded panels dated 1663. At the left-hand side is the truncated south-east crossing pier with two, triple-shafted responds originally for the south and east crossing arches. To the left-hand side is the south transept stair turret with a flat-headed doorway in the south side.

The north wall, formerly the south wall of the chancel, has a wide, round-headed arch with roll moulding set between triple clustered shafts with simple Romanesque foliate capitals. Formerly open to the chancel, it was blocked with masonry c1788. To the left-hand side of the arch is a triple sedilia, probably C15, with Perpendicular lierne vaulting. Above this is a C13 blocked lancet.

The east and south walls of chapel both have angle buttresses with two, three-light windows, all but the south-west window with the same Decorated pattern of trefoils within superimposed arches. The south-west window also has Decorated tracery, but with twin trefoil-headed panels in the centre.

INTERIOR: the interior is whitewashed with the walls hung with wall tablets and hatchments. Its floor is covered with ledger slabs. In the north-west corner there is a late-C12 foliage capital and a diagonally set shaft with a damaged capital. At the west end of the south wall there is a Decorated tomb recess. The roof has moulded beam and square panels.

MONUMENTS: surviving monuments include a memorial to Thomas Edwards, d.1634, and his wife, erected after 1641. Of a Jacobean style, it is of black and white marble with Corinthian side columns and an entablature on which two children kneel. A memorial to Richard Taylor, d.1741, comprises a wall tablet with Ionic side columns with bold brackets and a central leaf corbel. A memorial to Richard Hollings, d.1741, is signed by TF Pritchard and is of red mottled marble on which delicate drops of flowers and husks are displayed.

The precise origins of the medieval Church of St Chad, which is colloquially referred to as the Old St Chad’s, so as to distinguish it from the present Church of St Chad which opened in 1792, are unknown. It has been suggested that it was founded as a Saxon minster, being the second of Shrewsbury’s such foundations after St Mary’s. However, no known documentary evidence or structural fabric exists to substantiate these claims. What is known, however, is that St Chad’s was a collegiate church at the time of the Domesday survey, the private property of the bishop of Lichfield, having 16 canons before the Norman Conquest. Following the transfer of the see from Lichfield to Chester in 1075, an early-C12 bishop of Chester reorganised or re-founded the college with a staff consisting of a dean and 10 canons. This constitutional change probably took place under Roger de Clinton sometime between 1129 and 1159. Although it is unclear as to whether any substantial rebuilding work took place at this time, late-C18 illustrations of the church show that a great deal of reconstruction took place in the years before and after 1200. At a minimum the chancel was rebuilt at this time, whilst the aisles may have also been added and the transept windows renewed. The illustrations show that the final medieval church was a large, cruciform structure in the Early English style with a central tower over the crossing and a Lady Chapel in the angle of the chancel and south transept. It is possible that the tower may have been rebuilt in c1300, as a transomed window of early-Decorated style is also evident along with C15 aisle windows and a Perpendicular west window. In addition, like many other churches in Shrewsbury, the illustrations also show that St Chad’s was constructed from two types of building stone at two distinct periods. The transepts, chancel and nave are shown to be constructed from the red, Keele Beds sandstone, which was used in Shrewsbury in the C12 and C13, whilst the tower, aisles and Lady Chapel were built from Grinshill sandstone, characteristic of the later medieval period. In part, some of this rebuilding work may have been a consequence of a disastrous fire in 1393 when a lead worker’s brazier set fire to the roof and spread to the neighbouring houses, destroying much of Wyle Cop. Extensive works on at least the nave, chancel and tower roofs would almost certainly have needed to take place in the aftermath of the fire.

Early in the summer of 1788 cracks started to appear in the north-west crossing pier, one of the four pillars supporting the central tower. The churchwardens subsequently asked Thomas Telford, then a year into his position as the County Surveyor of Public Works, to inspect the church’s fabric. Telford reported that graves dug too close to the tower’s shallow foundations had weakened the structure and that the whole north side of the nave was in a dangerous state, augmented by the near total decay of the principal roof timbers. He subsequently recommended that the tower with its heavy ring of bells should be taken down immediately so that the shattered pier might be rebuilt with the decayed roof timbers being renewed and the north-west wall of the nave being secured. A vestry meeting considered Telford’s proposals to be a gross exaggeration and a stone mason was ultimately employed to cut away the cracked sections and underpin the pillar, without removing, or even lessening, the vast weight of the tower and bells. On the evening of 8 July, two days after work had commenced, an attempt to ring the bells for a funeral caused the tower to shake so violently that the Sexton immediately evacuated the building. The following morning, as the clock struck four, half of the tower collapsed, taking the roof and large sections of the church with it. Despite the considerable damage, some sections of the church were left standing, with the chancel, Lady Chapel and the south wing of the transept being left largely unscathed. Shortly after its fall, an Act of Parliament was obtained to raise money for the building of a new church. The parishioners were initially divided on the question of re-building the medieval church, or erecting a new church on another site. It was ultimately decided that a new church should be constructed on the site of a former quarry, a short distance to the north-west of the site of the medieval church. Although it was originally decided to demolish the late-C15 Lady Chapel, this decision was reversed and it was subsequently used as a cemetery chapel until the mid-C19. The chapel, which was re-edified by Humphrey Onslow, Sheriff of Shrewsbury, in 1751, was known as the Bishop’s Chancel when the church collapsed, being used for the purposes of holding the Consistory Courts of the Bishop.

In 1899, the newly founded Shropshire Archaeological and Natural History Society excavated what they believed to be the church’s crypt, the first-ever excavation in the town. Known as the 'Dimmery' i.e. dark place, it was found to be a rectangular structure with the remains of coursed sandstone walls. The unearthing of the lower sections of engaged shafts and a central row of columns, standing to a height of c1m, resulted in the excavation’s superintendent and local architect, Mr J Nurse, concluding that it had a quadripartite roof vault at the time the church collapsed. As it was also discovered that some of the columns were strengthened at a later date, it was further considered that the crypt was originally a timber-ceiled space which was upgraded in the C13. The excavations also extended outside of the structure’s west wall and two charcoal burials and a C8 or C9 writing stylus were found. As no known medieval Parish records survive to provide information on the use of the crypt, its origins and liturgical meaning have never been clear. Although it was originally thought to be the remains of a Saxon church, it is now believed that it was built in the C12 as substructure to support the church’s north transept on its sloping hillside site. The buried remains of the crypt or undercroft are separately designated as a scheduled monument.

The Old Church of St Chad, comprising the chancel's south wall and the south transept's east wall, both C12, and the late-C15 Lady Chapel, the latter being altered in the C16 and C17, with the remainder of the church largely demolished in 1788, is listed at Grade II* for the following principal reasons:

* Architectural Interest: its medieval fabric exhibits high-quality craftsmanship in its construction, use of materials and detailing;

* Survival of early fabric: it still retains an extensive amount of medieval fabric that illustrates its development and provides evidence for the architecture of the destroyed elements;

* Historic interest: along with the Church of St Mary, it was one of the principal churches in Shrewsbury during the medieval period;