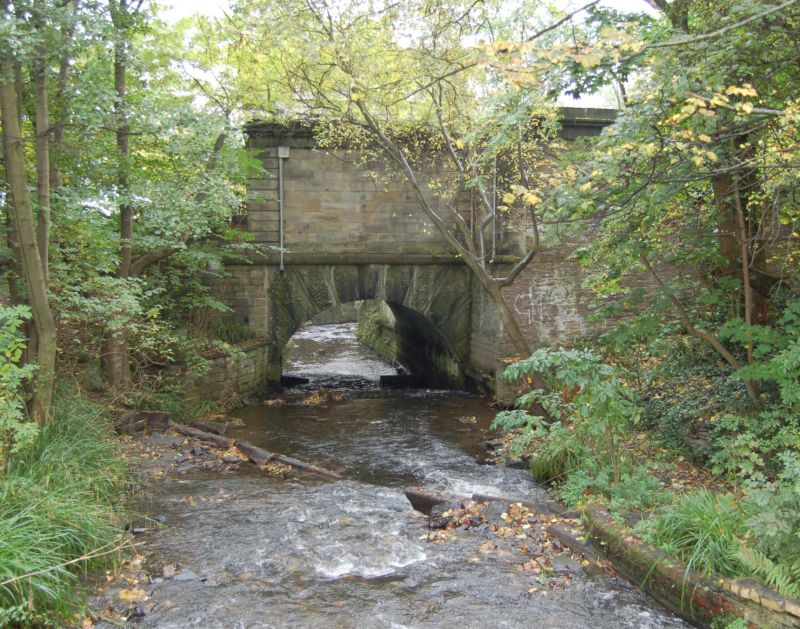 Main gateway, side lodges and supporting bridge with attached flanking and retaining walls. 1836 with late C20 alterations. By Samuel Worth, architect, of Sheffield, for the Sheffield General Cemetery Company. Greek Revival style. Ashlar, rock-faced and horizontally-channelled sandstone.
PLAN: Linear arrangement of GATEWAY with flanking LODGES, built upon an elongated BRIDGE spanning the Porter Brook. Attached flanking BOUNDARY WALLS extend to the north and south on the west side, and east wards on the east side, forming the retaining wall for the northern side of the original cemetery.
GATEWAY AND FLANKING LODGES: NORTH ELEVATION: Gateway with entablature and blocking course, comprised of a flat-headed central opening with flanking angle pilasters and 2 Greek Doric columns in antis. To either side of the gateway, blind front walls to the former lodges in ashlar masonry with channelled rustication, rising from shallow plinths. SOUTH ELEVATION has paired pilasters either side of a recessed and moulded semi-circular arch. Within the now roofless gateway, on the inner side walls of the lodges are 2 blocked doorways with moulded ashlar surrounds and cornices.
BRIDGE: WEST ELEVATION: Segmental bridge arch with massive rock-faced ashlar voussoirs and keystone, springing from massive rock-faced ashlar blocks. Above the voussoirs, a wide channelled roll moulding upon which the side wall of the flanking lodge is set. To the north and south sides of the arch, coursed channelled sandstone walling, that to the north side rising from a roll moulding and terminating at a similar moulding, which carries the ashlar masonry of the of the rear part of the former west lodge. Angled wall to north side of arch partially demolished.
EAST ELEVATION: Detailing of west arch repeated, with matching walling to south side extending eastwards. The long bridge running between the 2 arch faces is constructed of finely-jointed coursed squared sandstone, the courses running parallel to the length of the bridge.
ATTACHED BOUNDARY WALLS: Extending from former west lodge on the north side, a sloping masonry wall, with a roll moulding at the head of the bridge arch extended to form its base, approx. 10 metres in length. Buttressed coursed masonry wall, 42 metres in length extends southwards from south side of west lodge, with chamfered copings, formerly with railings. To the east of the east lodge, on the south side of the bridge, a battered masonry wall, forming the retaining wall on the northern boundary of the cemetery along the Porter Brook, extends 170 metres to the east. It is built of coursed squared channelled sandstone, and approx 4.5 metres high, incorporating a channelled roll moulding approx. 2 metres above the base, and with a plain flat coping.
HISTORY: The entrance gateway, side lodges and supporting bridge and attached walls formed a principal component of the Sharrow Vale Cemetery, laid out and opened by the Sheffield General Cemetery Company in 1836, to the designs of Samuel Worth. The cemetery became the most prestigious burial ground for Sheffield's non-conformist community, and was extended
in 1848 to accommodate Anglican burials.
A complex and carefully-detailed building forming the entrance to the most complete cemetery of the 1830's surviving outside London.