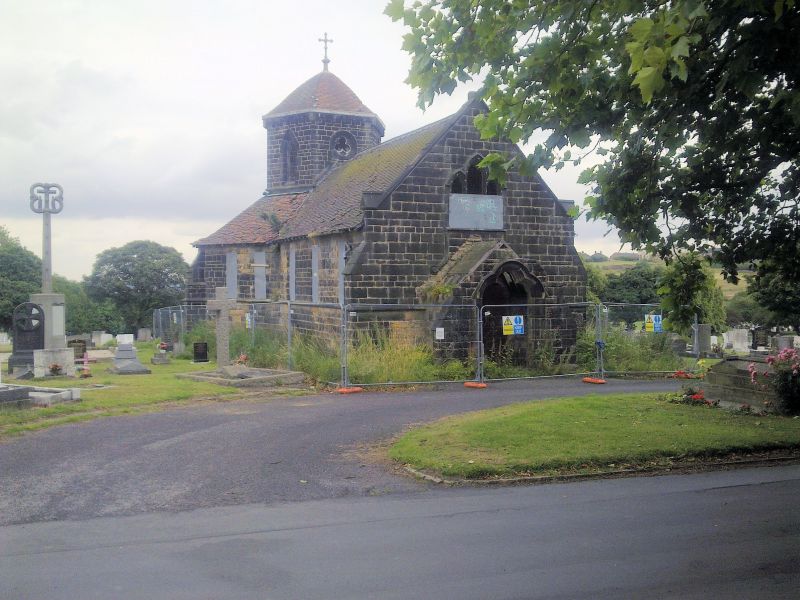 Roman Catholic mortuary chapel of St Michael. 1898-1900. By C
Hadfield, paid for by the Duke of Norfolk. Coursed squared
stone with ashlar dressings and plain tile roofs. Gothic
Revival style. Chancel with lantern, sacristy, nave and west
porch.
EXTERIOR: plinth, sillband and buttresses.
Hexagonal chancel has 2 single lancets on the north and south
sides, and is topped with an hexagonal lantern with a larger
single lancet on 5 sides, and a round-arched trefoil window to
west. Chancel and lantern have hipped roofs, the lantern
topped with a cross.
Single storey square sacristy has coped parapet and a large
square external corner stack with an octagonal flue. Single
windows to north and east, and stone doorcase to south, all
blocked.
Nave has coped west gable with finial. 3 single lancets on
each side, and in the west gable, a graduated triple lancet.
Central west porch has similar coped gable and finial with
moulded round-arched double door.
INTERIOR has a hexagonal arcade under the lantern, with
moulded pointed arches and hoodmoulds. Above the west arch, a
round window. East end has a moulded segmental pointed recess.
Nave has a lath and plaster groin vault with moulded wooden
ribs and tie beams. West end has a round cornered chamfered
doorway with double doors.
Building vacant at time of survey.
(150 Years of Architectural Drawing: Hadfield, Cawkwell,
Davidson: Sheffield: 1984-: 71).