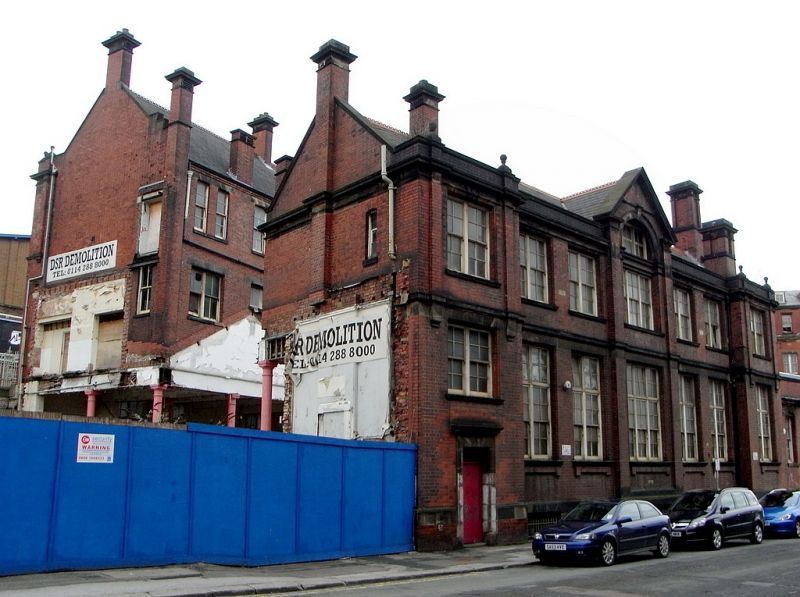 Post office, now offices, and attached railing. c1890, with
rear addition dated 1909. Red brick with ashlar dressings and
slate roofs with 2 gable and single ridge brick stacks, with
prominent stone coping.
EXTERIOR: first floor sillband, dentilled cornice and blocking
course, coped gables. Main block, 2 storeys; 7 window range.
Centre, flanked by brick pilasters topped with urns, has
pedimented gable and a paired 8 pane sash. On either side, 2
similar windows, the right one partly reglazed. Arcaded ground
floor has 5 moulded round arches with a central tripartite
window flanked by 2 paired 8 pane sashes. Under the central
window, blocked posting boxes, flanked by elaborate cast-iron
area railing. Projecting end bays have angle pilasters to the
first floor, carried up through a moulded cornice and topped
with ball finials. Coped gables also have ball finials. On the
first floor, a 2-light cross mullioned window with brick
mullion and stone transom, with a pair of 8 pane sashes.
Below, a pilastered doorcase with moulded cornice on brackets,
and fielded panelled double doors, those to the right with an
overlight. Above the doors, a pedimented panel with the VR
monogram, and a crown in the pediment.
Beyond, to left, a 2 storey addition, single window.
Projecting centre with angle pilasters and cornice to each
floor, the upper one dentilled. 3-light mullioned window with
8 pane sashes, and below, a similar 3-light cross-mullioned
window. To right, a single storey addition with angle
pilasters with ball finials, and coped gable with ball finial.
Single 3-light cross mullioned window with 8 pane sashes.
Rear addition, to Pond Street, in a simpler version of the
same style, 2 storeys; 7 window range. 2 gable and 2 side wall
coped brick stacks. Central bay has flanking pilasters and
pediment containing a round-arched opening with a double sash.
Single tripartite sash on each floor, the lower one larger. On
either side, 2 double sashes, the lower ones larger. At the
foot of each bay, a barred cellar opening. Projecting end bays
have coped parapets and pedestals with ball finials, and a
double sash on each floor. Left bay has a smaller sash to the
ground floor with a corniced doorway below it.
Beyond, to left, a gabled 2 storey block with coped gable
containing a round window. Double sash flanked by single
sashes. Below, 2 double board doors with louvred panels.
INTERIOR not inspected.