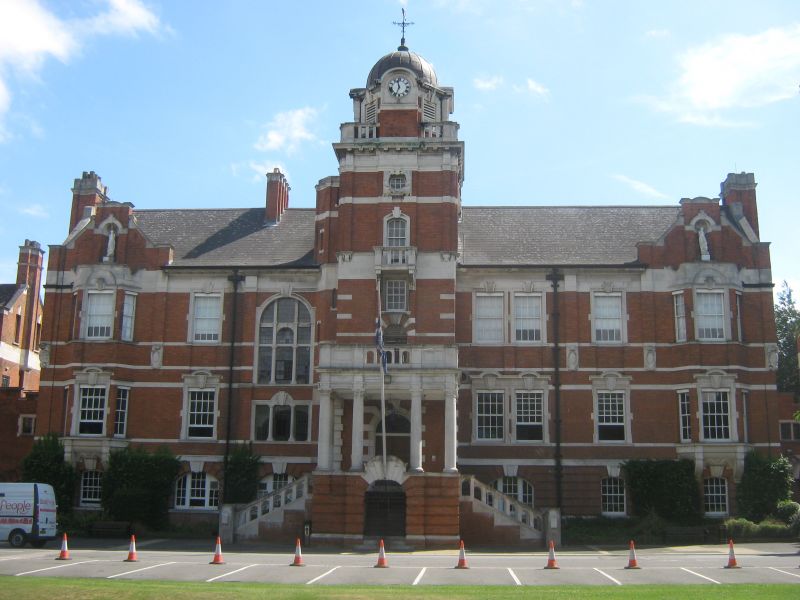 A large porch to the piano nobile has a banded base with a central round-arched gateway with scrolled top and flights of steps up each side with a balustrade; above, four Tuscan columns and entablature, with a parapet and central balustrade, two bays deep with blocked antae, to a round-arched doorway with good fanlight and double doors.

Four stage one bay tower is banded as the main range, with a round-arched first floor balcony doorway beneath a 6/6-pane sash, a bracketed stone second floor balcony, segmental-arched 6/6-pane sash with architrave, and a wreathed oculus; an octagonal belfry has balustrade all round, a cornice with segmental-arched pediments over clocks to front and sides, recessed louvred windows between, and a dome and finial. Basement windows have split keystones to 6/6-pane sashes, cambered heads to outer windows, wider elliptical arches to the inner bay which has tripartite windows. Upper floors have architraves with pulvinated friezes and pediments over keystones, paired to the inner bay, to 8/8-pane sashes; the left-hand side has an inner bay with three-light leaded casements, on the ground-floor with column mullions and a raised keystone, and a double-height round-arched stair window above with two transoms and a central round-arched light. The first floor has recessed aprons with cartouche between.

End gables have a two storey oriel on a massive moulded bracketed base, windows as the front, and a niche in the gable with a full-height figure. End returns have corbelled gable stacks, and a large diagonally-set lateral stack in the recessed rear section; segmental-arched bridges, reportedly added later, connect with the outer mess blocks (qv), with rusticated quoins, enriched cartouche keystones, crenellated parapets and five-light mullion windows.

INTERIOR: a large and richly decorated entrance stair hall has an open well stair with panelled wainscot and square newels with finials, and an open landing carried on marble columns over an axial passage with round arches. To the rear is the fine mess room, with a carved timber Free Baroque fireplace and overmantel with river gods and a panel inscribed ER 1901, half panelling, open end gallery, and a four bay queen post roof on dragon corbels holding cartouches; breakfast room to front has marble Ionic columns and a panelled ceiling. Enriched doors with Art Nouveau brasswork and pedimented heads.