Church of the Virgin Mary Eleousa 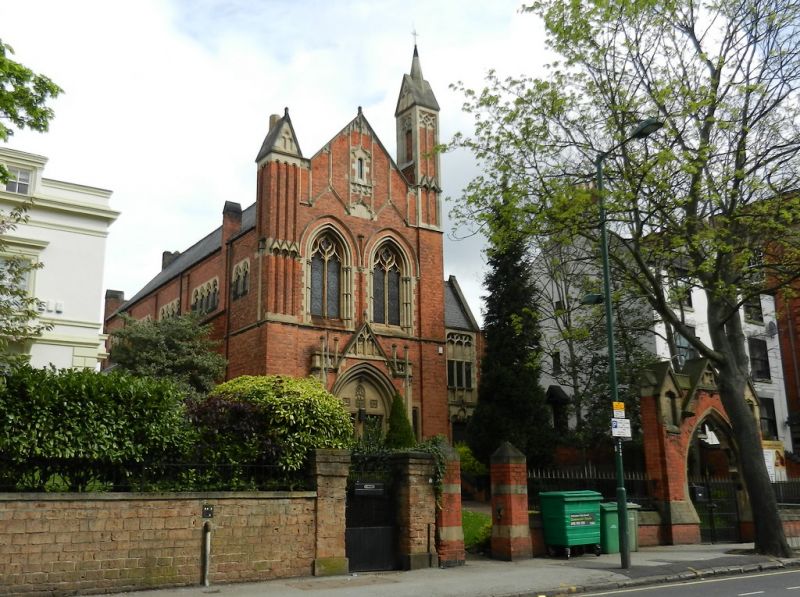 Congregational church, now Greek Orthodox church. c1880.
Red brick, with ashlar dressings and slate roofs.
Perpendicular Revival style. Nave with clerestory and aisles.
The west end, forming the main front, has the major
architectural features.
EXTERIOR: the west gable is coped and has blind tracery
framing a single lancet. Projecting porch with a pair of doors
in a pointed arched recess with shafts, under a traceried
gable. Above, two 2-light traceried windows in pointed arched
openings with shafts. To left, a panelled square turret with
gable. To right, a taller square turret with traceried
panelled bell stage, cross gable and finial.
Returns, single bay, have 2-light clerestory windows.
Nave, 4 bays, has shallow buttresses. Shouldered coped east
gable with a round window. Clerestory has unusual pointed
arched windows, 4 lights, with traceried linked heads. South
side has in the west bay a gabled stair turret. On its west
side, a doorway with shaped head, and above it, a cross
mullioned panel with traceried head and a 3-light window.
North aisle, 4 bays, has 2-light windows with trefoil heads.
West end has a traceried single lancet.
INTERIOR mainly in original form, with decorations and
furnishings appropriate to Greek Orthodox worship. These
include extensive wall paintings.
Main space has a boarded segmental roof with unusual
round-arched wooden trusses. Aisles have plain lean-to roofs.
East end has a chamfered pointed arch with brick extrados, and
above it a traceried panel framing a traceried round window.
The arch is filled with a painted panel and screened by a
panelled iconostasis.
Arcades, 5 bays, have similar arches with octagonal columns
and wall shafts. Clerestory has brick segmental arches. At the
west end, a raked wooden gallery and 2 patterned stained glass
windows. Under the gallery, a central projection with a
3-light traceried window, and on each side, plain doors.
Entrance lobby has half-glazed doors with shaped heads. Wooden
dogleg stair with traceried balustrade.
Fittings include original benches to main space and gallery.
Other fittings late C20.