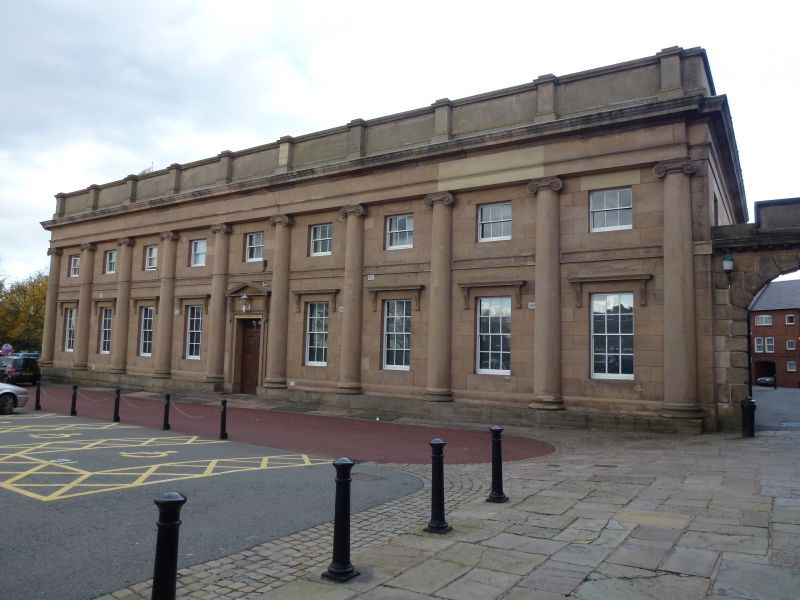 Barracks and Court of Exchequer. Now regimental museum of 22nd Cheshire
Regiment. Dated GIIIR 1810 on two rainwater heads. By Thomas Harrison of
Chester. Cuyper sandstone ashlar from the Manley quarries and Bunter sandstone
ashlar having slate roofs, with lead flashings. Two-storey ranges forming three
sides of a rectangular courtyard with enclosing wall. Facade facing Castle
Square: 9 bays with high projecting plinth supporting monolithic ½-columns of
Greek Doric form between bays and at the ends. These support a projecting plain
entablature with parapet above resting on slightly projecting plinth and divided
by projecting piers. Between the floors and set between the ½-columns is a
series of plain panels with moulded surrounds forming a decorated band. Central
ground floor double doorway with doors of 3 panels each with rectangular
overlights. Shouldered surround and pedimental overdoor supported by fluted
consoles which terminate in roundels. Ground floor sash windows to either side
of 3 x 4 panes (as are all the ground floor windows of the block) with aedicular
surrounds of compressed entablature supported by fluted consoles. First floor
sash windows of 3 x 2 panes. Archway adjoining front at right and joining with
lateral colonnade of Assize Courts block (q.v.) of rusticated stone with
segmental arch. Dentilled cornice and central panel to parapet with moulded
surround. Left hand end: three bays. Central double doors with fanlight over
and fluted consoles supporting overdoor. Sash windows to either side of 3 x 4
panes. Panel with moulded surround between floors. Three first floor windows
of 3 x 2 panes. Entablature above with plain undivided parapet above. To the
left of this is a slightly recessed block of three bays with two ground floor
windows. Plain band between floors and three first floor windows. Ashlar wall
to left of this with slightly projecting plinth and moulded cresting, ramped at
end nearest building. This wall continues forming a rectangular enclosure with
a canted northern end. Gateway to centre of this northern end with slightly
projecting surround and segmental head with voussoirs and projecting springers.
Right hand end: three bays, ground floor windows of 3 x 4 panes, that at right
originally a doorway. Panel with moulded surround between floors and entabla-
ture and parapet as before. First floor windows of 3 x 2 panes. To right are 4
slightly recessed bays. Door to third bay from left with rectangular overlight.
Plain band between floors. To the right is the enclosing courtyard wall,
ramping up by the block. Double doors in this wall adjacent to block. Rear:
ground floor of Bunter sandstone ashlar, upper floor of Cuyper sandstone. Six
bays to centre with basement area below. Ground floor sash windows of 4 x 6
panes with doors to right and left. Similar windows to first floor with one of
3 x 4 panes to extreme left and one of 3 x 2 panes between the fourth and fifth
bays. To either side are projecting wings of three inner-facing bays with
ground floor sash windows of 4 x 6 panes to ground and first floors of right
hand wing and one ground floor doorway to right of left hand wing with 2 sash
windows to the first floor of 4 x 6 panes. To the left of this is an extension
of 2 bays with blank walling to the ground floor and 2 sash windows of the 4 x 6
panes format to the first floor. Dated rainwater heads with plain downpipes to
re-entrant angles of wings. Of major importance as an element in the composi-
tion formed of the Assize Court Block, Propylaea and A and B Blocks.

Nikolaus Pevsner - The Buildings of England : Cheshire.
and Edward Hubbard

Moira A R Ockrim - "Thomas Harrison and the Rebuilding of Chester
Castle: A History and Reassessment".
Journal of the Chester Archaeological
Society. Vol.66, 1983.