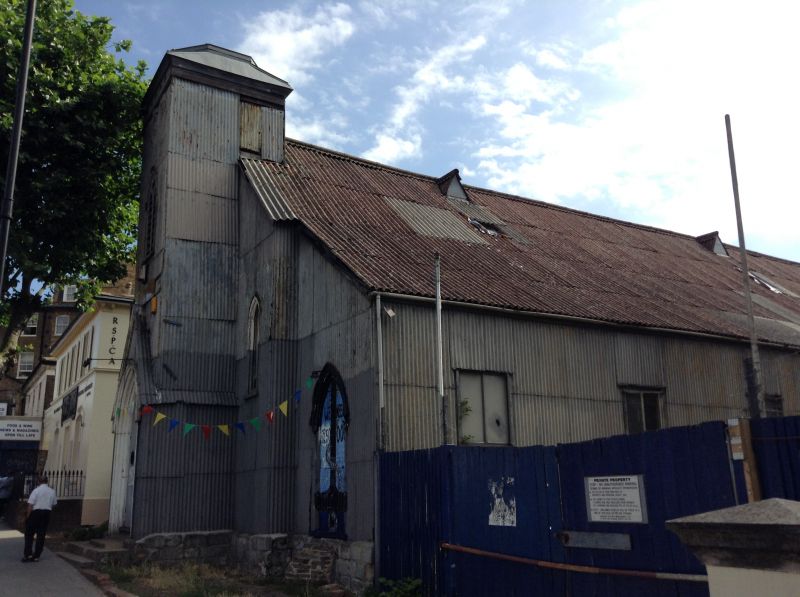 MATERIALS: Cambridge Hall is built of corrugated iron surrounding a cast iron and timber frame, with a boarded wooden roof covered in corrugated asbestos. The building stands upon brick plinths.

PLAN: the entrance porch leads to the nave, with aisles to either side. Partitions were added in the 1950s to the western half of the aisles, when the imitation Ton-Class Minesweeper interior was installed. This has created a ‘u-shaped’ range of rooms to the ground floor, with a “galley” walkway above with further rooms. At the east end of the hall, further partitions have created two rooms at ground floor level; the room to the north is currently in use as an officers' mess, with a second room to the south which gives access to the rear yard. At first floor level, there are three rooms behind the ‘bridge’ area.

EXTERIOR: the west elevation fronts onto Cambridge Avenue and has a symmetrical appearance. The central tower has a large, arched door case with a steeply pitched gable above, which houses panelled timber doors with porthole windows. Above, there is a pointed arched window with two lancets with louvres and a quatrefoil above. To either side of the tower there are lancets, followed by large arched windows to the aisles.

The south elevation has six windows spread evenly, with a fire exit to the easternmost bay. The north elevation has three windows, followed by a blocked opening. A late C20 brick-built extension projects and houses a toilet block. The east elevation consists of corrugated iron sheeting with no openings for doors or windows.

INTERIOR: from the entrance porch, the nave is accessed through a pair of timber doors with porthole windows. To each side there are timber partitions which are fronted in steel, apparently salvaged from Leyland buses. These occupy the western portion of each aisle. The rooms at ground floor have a variety of uses; most notably a room to the south houses a consecrated chapel. The rooms at the upper level were not inspected. There are hardwood floors throughout, with the bow of a ship marked out in front of the bridge. There is also some unusual arcading, with cast iron columns with moulded capitals and tall slender wooden arches. The roof has six tiers of purlins and the principal rafters have giant wooden arches with pierced daggers, mouchettes and quatrefoils.

A 1942 Bofors anti-aircraft gun is situated in the centre of the nave, with a 20mm Oerlikon light anti-aircraft cannon to the north-east. The Bofors gun is often referred to as being of Swedish origin, and although this may be the case, Britain had a licence to build them and there is a chance it could be British made. Likewise, the Oerlikon autocannon was a Swiss design but probably British made. It is understood that a 6 foot granite baptismal font remains under the floor to the rear of the Bofors gun, but this was not seen.

The building is a prefabricated structure clad in corrugated iron, a type commonly referred to as tin tabernacles or iron chapels. Corrugated iron was invented and patented in Britain as early as the 1820s, and by 1850 it was being exported all over the world. It was a technological breakthrough, the corrugations giving strength and considerable structural advantages over flat sheeting. Many thousands of prefabricated buildings were erected, comprising a timber or iron frame with corrugated iron cladding, galvanised with tin to prevent rust. Commonplace in both urban and rural contexts, they were derided by some, but owing to their ease of construction and maintenance, were readily adopted by others. The tin tabernacles are the best known examples of such structures, taken up by the non-conformist movement to great effect, particularly in expanding urban areas.

Cambridge Hall was built in 1863 as St James’s Episcopalian Church and is contemporary with much of the surrounding Kilburn Park estate. It appears that the church was active until the mid-1920s. The building is documented as being used as an Air Raid Precautions store during the Second World War, and was later known as the Lord Lloyd of Dolobran Memorial Hall. The building was taken over by the Sea Cadets in about 1949, and from then on was known as Training Ship Bicester, following the established practice of naming a training building after a decommissioned vessel to which the branch is linked. The interior was substantially altered in the 1950s, when the Sea Cadets installed a new interior, a mock-up of a Ton-Class Minesweeper vessel. It is understood that the chamfered spire was stolen in the 1980s, and has not been replaced. A toilet block was constructed to the north elevation in the late C20.

Cambridge Hall, Kilburn, is listed at Grade II for the following principal reasons:

Architectural interest:
* as an early and large example of a prefabricated, corrugated iron church;

* for the particularly decorative iron and timber framing, unusual for a building of this age and type.

Historic interest:
* for the highly unusual reuse as Training Ship Bicester for the Sea Cadets.