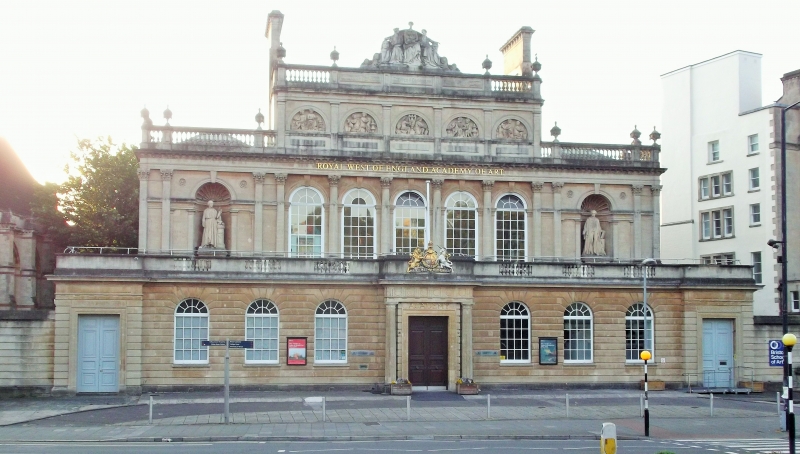 Art gallery. 1857. Interiors by C Underwood. Facade by JR
Hirst. Altered 1912 by SS Reay and H Dare Bryan. Limestone
ashlar with lateral stacks, roof not visble. Double-depth
plan. Italianate style. 2 storeys and attic; 6-window range.
3 stepped tiers, the C19 ground-floor set forward. Banded
rustication to the ground floor to a cornice, parapet with
balustraded sections over the windows; the entrances at the
ends and centre set forward, the outer ones have architraves,
lintels inscribed STUDIOS to the left, and SCHOOL OF ART to
the right, triglyphs to frieze above, and 2-leaf 8-panel
doors, the middle one in a porch with fluted Doric columns to
a frieze and cornice, with heraldic carving of a cartouche
held by beasts above. 3 semicircular-arched windows between
with glazing bars.
The first floor is in 3 sections, the outer ones articulated
by paired Corinthian pilasters flanking large shell head
niches with statues of Flaxman and Reynolds, with impost bands
and subsidiary pilasters to the middle, and balustrades above
with draped urn finials; between are 5 keyed
semicircular-arched windows articulated by attached Corinthian
columns, to a frieze and modillion cornice. The blind attic is
in 5 sections articulated by pilasters to a frieze and
cornice, balustrade to the outer sections with 3 inscribed
panels between, and 5 lunette niches with allegorical
carvings. A large carving of 3 female figures crowns the
parapet; large stacks each side with corbelled cornices.
INTERIOR: fine interior with much coloured marble: entrance
lobby with fluted pilasters, an imperial stair with black
turned balusters and rail, and large newel plinths with
cast-iron lamps with bowls; pedimented statue niche on the
half-landing; similar first-floor lobby has a coffered, domed
ceiling, and spandrels painted by Walter Crane; exhibition
rooms have Greek carved friezes below cornices with acroteria;
doorcases have panelled reveals, dentil cornices and 6-panel
doors.
NOTE: the original external stair was enclosed by Reay,
working to drawings by Bryan, who also glazed the piano nobile
and vaulted the first-floor lobby. Part of an outstanding
group of civic buildings, and a fine example of its type.
(Gomme A, Jenner M and Little B: Bristol, An Architectural
History: Bristol: 1979-: 349; Crick C: Victorian Buildings in
Bristol: Bristol: 1975-: 33; Winstone R: Bristol As It Was:
Bristol).