Number 51 Including Arch and Part of Wall at Rear 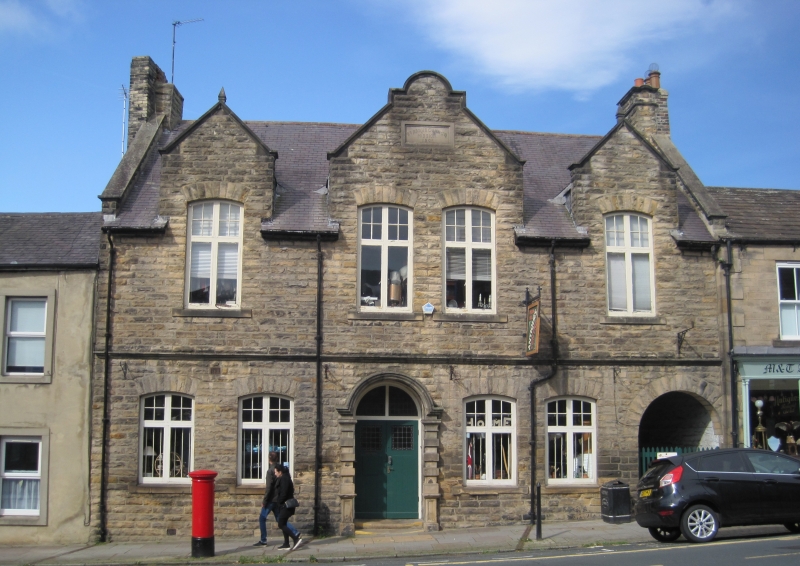 Entry Name: Number 51 Including Arch and Part of Wall at Rear

Formerly known as: No.51 St Mary's Mission Hall THE BANK.
Mission Hall, now job centre. Dated 1901. For the parish of St
Mary. C15 inscription and C16 arch in rear wall incorporated
into 1901 building. Rock-faced stone with ashlar dressings;
rear older rubble with eroded ashlar fragments; roof of Welsh
slate with grey ridge tiles and stone gable copings and
chimneys.
EXTERIOR: 2 storeys; 3-window range. Round-headed vehicle arch
at right with voussoirs. Recessed double doors and
semicircular 2-pane overlight at left of second bay in
surround of rusticated pilasters and segmental cornice. Low
segmental heads with voussoirs to cross-casements with upper
glazing bars: 2 in first bay, one to right of door, and one in
third bay to left of vehicle arch. Taller windows in similar
style on second floor, paired in centre, rise through eaves
under gablets, the central shaped and containing inscription
stone in gable peak. Roof has plain gable copings and end
chimneys and central truncated lantern.
Rear of vehicle passage has moulded segmental arch at left,
above that the eroded inscription, and to right of that in
first floor a fragment of carved stone apparently a beak-head
string with head corbels. Fragment of stone.
INTERIOR: not inspected.
HISTORY: the ashlar inscription previously listed in isolation
is described in Boyle's `Guide to the County of Durham' as
being `in Surtees' day' set in an arch leading to the yard of
a house in Thorngate' (the former name of The Bank), but in
Boyle's time set in the rear of the house; these stones and
another mentioned in the previous list supposedly read:
`Ricardus/ Broun, Abbat cui a'i'e' p'picietur Deus'. According
to Hutchinson the old house was perhaps the site of the Friary
and Chapel founded in 1381 by the Austin Friars.
(Boyle: The County of Durham: 1892-: 693-4; Clack: Archaeology
in the North. App.A vi ... Barnard Castle: Durham: 1976-:
210).