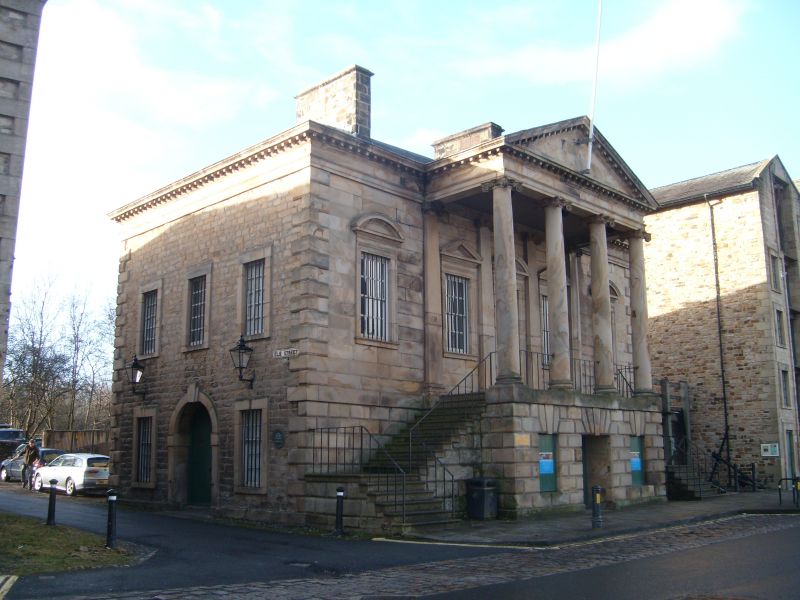 II*
The former Custom House stands on the south west side of St George's Quay. 1764, designed by Richard Gillow for the Port Commissioners. Restored 1983-4 and now forming the principal part of Lancaster's Maritime Museum.

EXTERIOR: Sandstone ashlar at front, squared coursed sandstone to the left-hand side, and rendered to right-hand and rear. Some internal walls said to be of brick. Hipped slate roof. Two storeys above a rusticated basement. Symmetrical five-bay street facade which has a tetrastyle Ionic portico with monolithic columns nearly 5m high and four corresponding pilasters dividing the bays of the front wall, plus chamfered quoins and an entablature with modillion cornice. The columns came from Mainstones Quarry at nearby Ellel. The windows of the principal storey are glazing bar sashes with external security bars, and architraves with alternating segmental and triangular pediments. The central nine-panelled door has a segmental pediment. The portico is approached by stone steps with iron railings, with two flights and a half-landing on each side. Below the portico the basement storey has two blind window openings flanking a central doorway, originally to the Weigh House. All three openings have flat arches with slightly dropped keystones. Two chimneys are placed symmetrically on the ridge; these were reduced in height, possibly c1965. The entablature is continued on the left-hand return wall, which is of three bays and has chamfered quoins, and glazing bar sashes with plain surrounds. In the central bay is a doorway with a plain stone surround forming a semicircular arch with keystone and impost blocks. The rear wall has a gable corresponding with the front pediment, and a first-floor Venetian window with triple lintels to the side lights. Adjoining the right-hand return wall is a single-storey glazed link added in the late 1980s to connect the former Custom House with the adjoining warehouse.

INTERIOR: The principal floor has a central room (originally the Long Room) extending the full depth of the building, now with a late C20 spiral stair at the rear. The ceiling is coved above a plain cornice and the stone fireplace surround is carved with raised and fielded panels and a keystone. Rooms, originally used as offices, open off each side of the main room; to the left are two, but the right-hand rooms are now combined. Each retains its stone fireplace. At the back of the Long Room, two small rooms also originally used as offices, with partition walls of hand-made brick. The fireplaces in these rooms have been removed, though the base of the chimney stack to the rear gable wall survives. The ground floor is divided into three rooms separated by arches in rubble walls, the main room being the former Weigh House. The left-hand room, the former Watch House, contains a fireplace.

HISTORY: Built to replace an earlier Custom House, and in use as such until 1882 when the Customs were transferred to Barrow-in-Furness. There was no direct access between the two floors. The ground-floor Weigh House was used for checking goods before they went into bonded warehouses. On the first floor was the 'Long Room', occupied by clerks, and the offices of the principal officers of the Customs.

The commissioning of the Custom House was an expression of the confidence felt by Lancaster merchants about the growing prosperity arising from their colonial trade. The warehouses and houses of St George's Quay were all built for merchants whose fortunes were dependent on the slave trade. By 1764 Lancaster was England's fourth slaving port, though considerably behind London, Liverpool, and Bristol. During the years 1750-1775 Lancaster ships made more than a hundred voyages to the African coast; during the course of the eighteenth century her ships carried more than 29,000 slaves out of Africa. Being a river port, Lancaster's vessels were relatively small, and her merchants concentrated their slaving transactions on river trading and small-scale purchases of slaves in the Gambia, Sierra Leone and Windward coast; the slaves were taken to be sold across the West Indies, and in South Carolina.

In addition to sugar, rum, and cotton, the ships brought back mahogany to supply the town's thriving cabinet-makers. The most important of these was Gillow's, and it was Richard Gillow, an architect as well as furniture designer, who was employed to design the new Custom House. Gillow had been to Barbados in 1753.

Lancaster's growth through the slavery encouraged her poorer neighbours, such as Preston, Poulton, and Ulverston, to engage in the trade. However, the distance from manufacturing centres for exports and markets for imports eventually proved a disadvantage, and the slave ships ceased to sail from Lancaster in the 1790s, though some Lancaster merchants continued to clear their vessels from Liverpool until 1807.

During the nineteenth century, Lancaster's Custom House continued to collect dues from both overseas and coastal trade, but the town was increasingly dependent on industrial manufacture (notably of linoleum) rather than trade. The Custom House closed in 1882, when the collection of dues was transferred to Barrow-in-Furness. From 1884 until about 1930 the building was leased to a patent ventilation manufacturer; thereafter part of the ground floor was used as an electricity sub station. In 1944 the building became home to the Lancaster Amateur Dramatic and Operatic Society, who used it as a rehearsal space until 1983. The Custom House was restored by Lancaster City Council in 1983-4, and the building opened as the Lancaster Maritime Museum in 1985.

The Custom House stands at the centre of St George's Quay, forming part of an outstanding eighteenth-century riverside sequence, much restored in the 1980s. Eighteen other sites are listed (several of the designations cover more than one building); most of these are warehouses and houses, but a corn mill and the quay wall are also listed. Directly the west of the Custom House are two warehouses (no. 27), converted c1987 to form part of the museum. Directly to the east of the Custom House stands the house and warehouse of Dodshon Foster, a wealthy Quaker merchant, both listed. In 2005 an anti-slavery memorial commissioned by Lancaster's Slave Trade Art Memorial Project (STAMP) and designed by Kevin Dalton-Johnson was placed on St George's Quay.

REASONS FOR DESIGNATION
The Maritime Museum, Lancaster is designated at Grade II* for the following principal reasons:
* A notable and complete example of an eighteenth-century custom house, of Palladian design
* Group Value, standing at the centre of an outstanding sequence of riverside buildings
* Strong connection with the slave-trading mercantile community of eighteenth-century Lancaster adds to historical interest of building