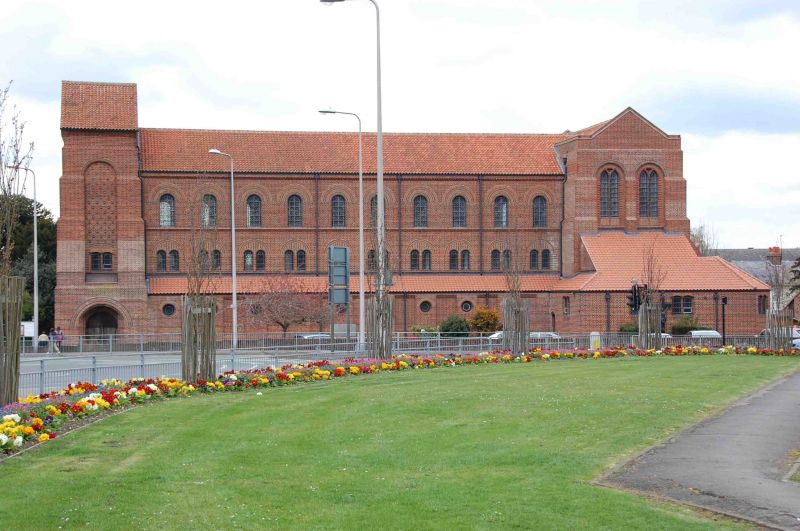 On the left is a small planked door with semicircular head and on the right a
small window deeply recessed within a semicircular headed opening. Baptistery
north side: Similar to south side but with 3 small rectangular stair windows,
replacing the porch. Sanctuary east end: parapet to gabled roof. On the
left a single storey semi-octagonal projection to the Lady Chapel and on the
right a similar projection to the vestry. 5 bays centre section to sanctuary.
Recessed brick panels with 3 circular windows to ambulatory; small door on
right. 3-stage buttresses between recessed panels, rising to impost level of
top windows which are 2-light with pointed heads, within semicircular beaded
openings. 3 semicircular headed windows above ambulatory level.
Lady Chapel, south side: Two, 2-light windows with segmental heads of tile
slips. Wooden cross in centre with carved wooden figure of Christ. Steeply
pitched lean-to-roof to south wall of sanctuary; which has two large, 2-light
windows with pointed heads in recessed panels with tile-slip semicircular
heads and tile slip spandrels, and brick quoins. Coped gable to gabled roof
rising above nave level.

Interior: brick throughout. 9 bay arcades with semicircular arches to
aisles. Square piers with chamfered edges with mmlded stone bases and
capitals. Semicircular brick shafts springing alternately from bases of
piers, and abacus level of pier heads, and rising to a moulded stone corbelled
head which carries a shaped wooden bracket to concealed roof trusses.
Ceilings to nave and sanctuary are painted in geometrical designs on wooden
boards. Brick altar with painted Tester over, depicting the Dove of Peace,
with tongues of fire denoting the Holy spirit. Stained windows in the
sanctuary by A E Buss of Goddard and Gibbs. The church replaces an earlier
church by W Butterfield, which was destroyed by bombs during an air raid on
February 10, 1943.