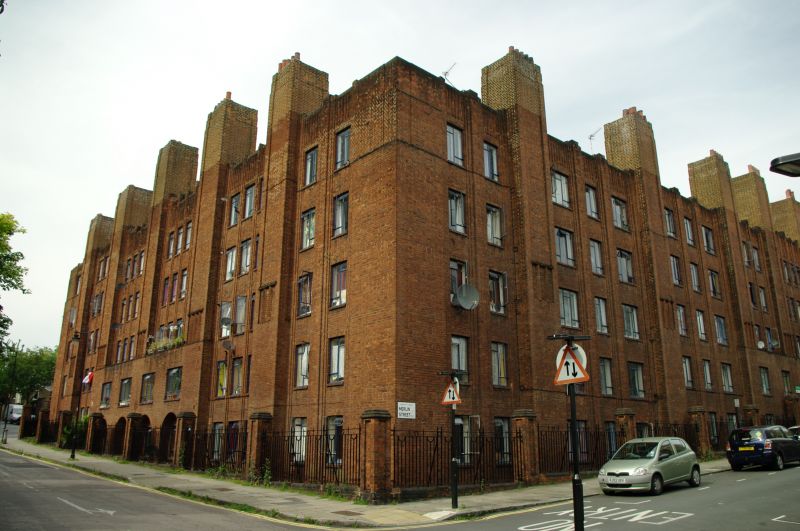 Red brick laid in Flemish and English bonds with moulded brick dressings to street elevations, and multi-coloured stock bricks to courtyard elevations; roofs obscured; projecting, picturesque red-brick stacks demarcate breaks in the roofline where the blocks step up the hill.

INTERIOR: Ninety-six two and three-bedroomed flats were originally provided on five floors, with a covered playground in the basement. Minor alterations have occurred.

History: Nos. 22-24 Wilmington Square, formerly on this site, were demolished in order to build the austerely impressive Charles Rowan House Police Flats block. As early as 1904 the Metropolitan Police Authority planned housing for 500 married policemen. Records indicate that this early goal was not reached; a concerted effort at building police accommodation did not occur until the 1950s. Plans for those in Wilmington Square survive in the Public Records Office but they appear to be the only ones. At least three other police flats by Trench are extant: Crawford Street, Marylebone, 1925; Kintyre House, New Park Road, Lambeth, and Cornwall Street, Waterloo, but Charles Rowan House is the least altered and most architecturally assured of the group. Stylistically it is also unusual for this country and exhibits a powerful, Expressionist manner most often associated with continental design of this period.