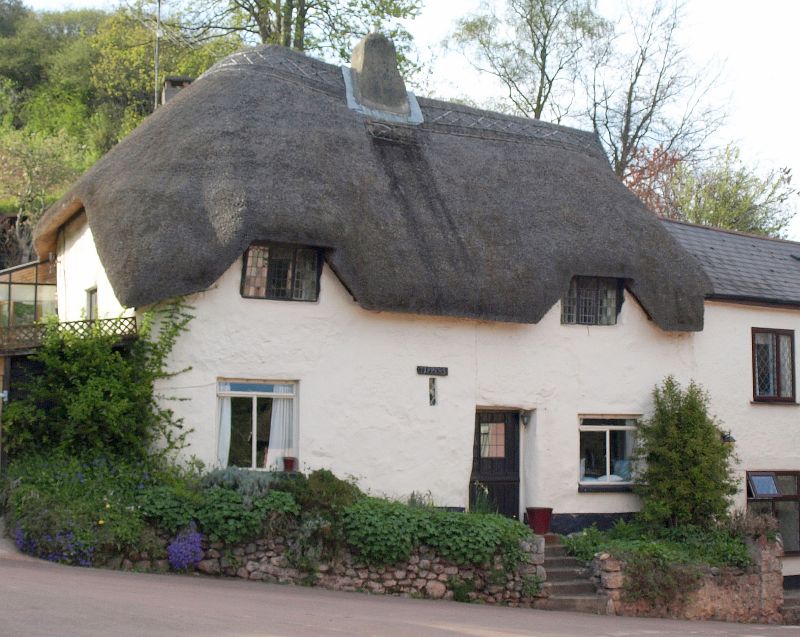 Small house. Early C17 or earlier, rear wing probably a C18 outbuilding subsequently
converted to enlarge the house. Whitewashed rendered cob on stone rubble footings;
thatched roof, hipped at left end, gabled at right end at junction with adjoining
house; axial stack with rendered shaft.
Plan: An unusually small house considering the quality of its detail. Overall L
plan, the main block a 2 room and cross passage arrangement with the hall to the left
and the hall stack backing on to the passage, newel stair adjacent to hall stack,
small unheated lower (right) end room. The remains of decorated plasterwork upstairs
indicate a first floor chamber of high status. The house may have originated as a
late medieval open hall but without acces to the apex of the roof this remains
conjectural. The rear right wing, 2 rooms on plan, appears to be a converted
agricultural building.
Exterior: 2 storeys. Asymmetrical 2 window front, the eaves thatch deeply eyebrowed
over the first floor windows. C20 timber door to right of centre, ground floor
windows C20 metal-framed casements in enlarged embrasures; tiny C17 stair window with
diamond leaded panes to left of the front door. 2 first floor 3-light C17 mullioned
windows, chamfered internally, with diamond leaded panes and ornamental leading in
the heads of the lights.
Interior: Remains of a plank and muntin screen (incomplete to the rear) at the lower
side of the passage and section of oak screen at the higher side of the passage. The
hall has good exposed carpentry; chamfered stopped crossbeams and exposed joists,
some of the joists scratch moulded. Open fireplace with a chamfered bar-stopped
lintel. The lower end room (unheated) has a Georgian china cupboard in the thickness
of the wall. The first floor room over the hall has the remains of a decorated
plaster ceiling over the window, similar character to the decorated plasterwork at
Yarner in Combeinteignhead (qv), with the initials I,I and M. Scratched on one of the
panes in the window are the words "The Prisoners of Exeter Castle 86", presumably
1786.
One of the panes of the window above the lower end room is scratched "William and
Margaret Martyn, dated 1786".
Roof: Apex largely inaccessible and not inspected, the truss over the hall is a
side-pegged jointed cruck and may be medieval. The truss over the lower end has
straight principal rafters; but these may be pegged on to wall posts.
An attractive traditional house with good interior features.