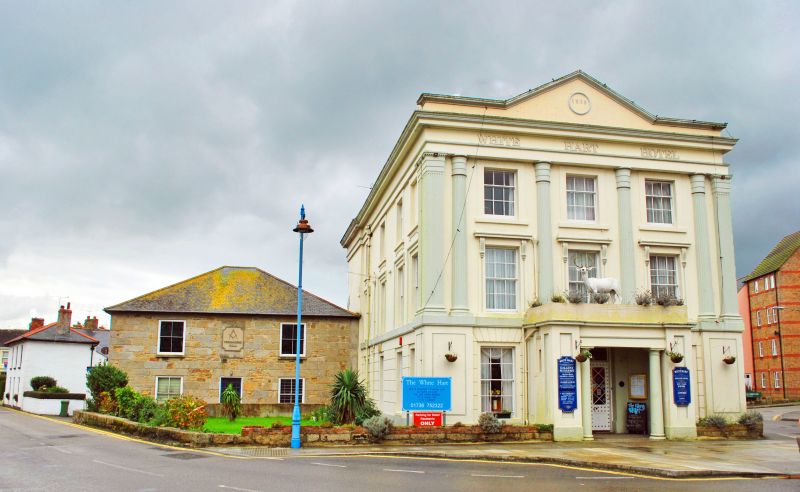 HAYLE FOUNDRY SQUARE (south side),
SW 5437-5537
Hayle
10/96 No 10 (The White Hart Hotel)
-
GV II*
Public house. Circa 1838. Built for Henry Harvey, brother-in-law of Richard
Trevithick. Stuccoed walls. Scantle slate roof behind stuccoed parapet.
Stuccoed chimneys over the side walls, left.
Plan: rectangular plan 2 rooms wide and 3 rooms deep. 2 equal reception rooms a
the front flanking a central entrance hall leading to a large stair hall behind
the right-hand room. Classical style.
Exterior: 3 storeys. Stuccoed elevations with classical detail. Rusticated
courses at ground floor with stucco flat arches. North entrance front has the
central doorway within a panelled stucco porch. Original pair of doors with
latticed glazing and original fanlight with scrolled detail. Corners of the
front are panelled pedestals carrying a giant order of clasping square fluted columns as antae to the 3 bays of the upper floors with 4 engaged giant round columns, the whole surmounted by a Tuscan entablature and a parapet with an
open pediment at the middle with central round plaque. The columns are a kind
of debased Roman Doric with an Egyptian influence to the design of the capitals First floor windows have moulded hoods on carved consoles. The side elevations have eared architraves to the first-floor windows with aprons under the sills. All the windows (except ground floor left of east elevation) are original hornless sashes with glazing bars. The west elevation has a tall round headed stair window.
Interior: partly inspected. Entrance hall and stair hall have their original
architectural details, including arches, plaster cornices and a fine open well
stair with the mahogany handrail curving down to form the newel post. This
building is erected on the site of the former Penpol pool (blamed by Henry
Harvey for the spreading of cholera in the town).
Sources: John B. Carter for the Trevithick Society ; Richard Trevithick by James
Hodge ; The Harveys of Hayle by Edmund Vale.