The Guildhall and Attached Railings 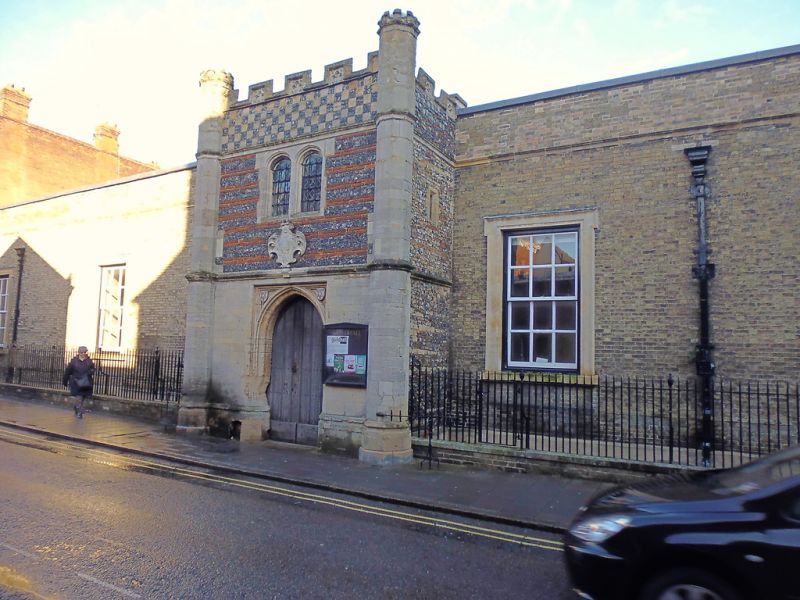 GV
I
Guildhall. C13 and C15 with C17 and early C19 alterations and additions. In brick, stone and flint. The oldest part is the C13 stone entrance arch, now within a late C15 porch.

EXTERIOR: 1 and 2 storeys; 7-window range in all. The doorway has 3 orders of colonnettes and dog-tooth ornamentation. The 2-storey porch has a stone-faced ground storey and is enclosed by small octagonal stone turrets. The upper storey has a moulded stone string course above and below and is faced in alternate bands of red brick and black knapped flint. The castellated parapet has chequer flushwork in knapped flint and stone. The side walls are in flint mixed with red brick and stone. The rectangular doorway has arched spandrels bearing heraldic shields and on the upper storey a 2-light window with arched stone surrounds to the lights has diamond-leaded panes behind cast-iron grilles. Below the sill is a carved stone escutcheon bearing the Coat of Arms of the Borough of St Edmundsbury. To each side of the entrance porch the building is faced in white brick, probably of 1807, with a plain parapet above a moulded stone cornice. Three 12-pane sash windows on each side have moulded stone eared architraves and sills. The wings are fronted by cast-iron railings on a low brick wall.

INTERIOR: the inner entrance arch leads into a passageway with a principal room on each side. To the left, the Court Room, in 4 bays, with the lower part of the roof trusses visible below a flat ceiling: main posts with long arched braces resting on corbels. Framed above the inner side of the doorway are the Royal Arms of James I. At the north end, square Jacobean panelling encloses a raised dais area. Above it, a full-length portrait of James I. Panelling and dado along the west wall. Along the east wall a gallery with balustrade and stair is supported by fluted Doric columns. This links with a 2-storey extension on the east added in 1806/7, with an upper room used formerly as a council chamber. To the right of the entrance, 6-panel double doors in an eared architrave lead to the Banqueting Room, which is half panelled with raised fielded panels and a moulded dado. The slightly coved ceiling has a heavy wood modillion cornice. At the south end, a mid-C18 marble fireplace in an eared surround with enriched architrave and dentil cornice. Above the fireplace, a portrait of Jankyn Smith in an ornate architrave with a broken pediment enclosing a shield with the arms of the Borough.
Above the entrance door an open minstrels' gallery with bobbin-on-reel balusters leads to the Evidence House above the porch, a small room with a 4-centred ceiling. In the thickness of the east wall is the original C15 safe-cupboard with an oak door divided into 6 panels by iron bands studded with nails. The narrow side windows have a deep inner splay. The C15 roof above the main range is in 10 bays and of unusual form with a combination of king- and queen-posts in the trusses associated with multiple tension-bracing. The 1st truss at the south end, above the former dais of the Banqueting Room, is very ornate with a moulded cap and base to the king-post; the remaining trusses are plain, the king-posts of square section, braced to a heavy ridge-piece.
To the rear of the Guildhall, originally approached by an outside passage from the back of the Banqueting Room, are the remains of the former Guildhall Kitchen, later known as The Old Mortuary, and now called The Old Borough Stables. This was almost completely rebuilt in the mid-C19, apparently reusing Tudor bricks. Prior to that time it is said to have been timber-framed with ornate mullioned windows.